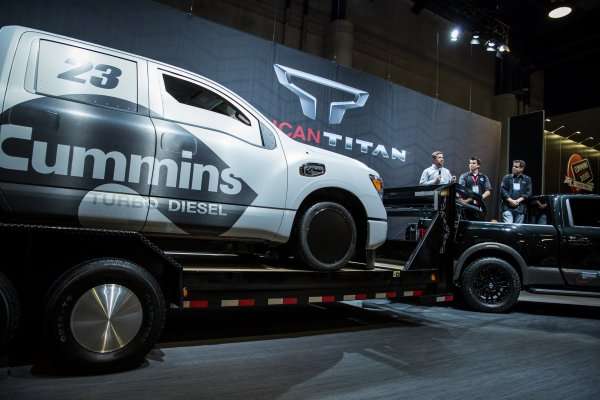 Can a full-sized pickup truck be modified to become a world record speed holder? Nissan and Cummins are going to find out with a specially modified Titan XD being shown at the SEMA show in Vegas.
Advertisement

The 2016 Nissan Titan XD enters showrooms in December and features a huge 5.0-liter V8 turbodiesel engine from Cummins which produces 555 pound-feet of torque. Remember that number as it plays a role in this story.

At the Specialty Equipment Market Association (SEMA) show in Las Vegas this week, Nissan is showcasing a land speed racer dubbed Project Triple Nickel. The racer is a heavily modified Titan XD and the project title is, of course, an homage to the truck's stock engine.

This truck, though, has and will continue to see a few changes from that original blueprint. Nissan and Cummins have teamed up to create the truck as a potential land speed record winner. "What better place to show off the latest collaboration between Nissan and Cummins than the 2015 SEMA Show," said Pierre Loing, vice president, Product Planning, Nissan North America, Inc. "Land speed record racing is one of the most intriguing and difficult forms of motorsport, and what we learn from this undertaking will be beneficial to all as TITAN is continuously developed."

The collaboration is even more interesting given that both companies have land speed record holders on their employee rosters. Those employees have volunteered to help guide the ongoing project, lending expertise to the build. The Nissan Titan XD Triple NIckel will compete in the D/DT class and the FIA class A-III-9. Records for those are 191 mph and 115 mph respectively.

"Our working teams have been discussing a land-speed record racing project for some time now, and we are thrilled to debut this truck at the 2015 SEMA Show. Our founder, Clessie Cummins, would be proud of the volunteers willing to spend the time pushing his diesel to its limits," said Jeff Caldwell, general manager of Global Pickup & Van Business, Cummins.