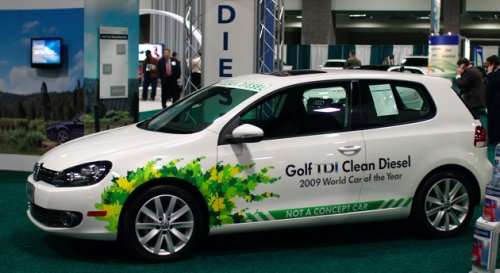 Sales of clean diesel vehicles in the United States rose by 27.4% in 2011 compared to 2010. At the same time, hybrids saw sales drop by 2.2% in the same period. Clean diesels make up about twice the market segment that hybrids do.
Advertisement

According to Baum and Associates, a market research firm, clean diesel vehicles (defined as diesels with lower emissions and better efficiency than traditional automobiles) make up about 3% of the current passenger vehicle sales market in the U.S. Hybrids make up a little over 1% of that market.

Baum predicts that the clean diesel market will double to 6 or 6.5% by 2015 as the technology becomes more accepted by normally diesel-leery Americans. Clean diesel is currently the second-largest market for passenger vehicles in Europe, coming in just behind petrol (gasoline).

A 27% gain is nothing to shake a stick at in today's lackluster vehicle sales market. Automakers are taking note and many, especially European manufacturers, are expanding their plans for diesel sales in North America. Heightened federal fuel efficiency standards, requiring a corporate average fuel economy (CAFE) average of 54.5mpg by 2025, will further fuel diesel's adoption.

The average clean diesel vehicle is 20 to 40% more fuel efficient than its gasoline counterpart and often has lower emissions overall than gasoline as well. Most automakers, including Detroit's Big 3, have clean diesel vehicles on the road in Europe, Australia and Asia. Some, such as GM, have plans to begin selling those diesel models in the U.S.

Diesel technology has come a long way from its former smoke-spewing days. Many new changes and technologies have meant cleaner, more efficient engines. The most common clean tech in diesel is turbocharged direct injection (TDI), pioneered for passenger cars by Volkswagen and Audi. Both companies have won successive awards at the LA Auto Show's Green Car of the Year for TDI models (photo is of the 2009 winner, the VW Golf).

Further, the cost premium for clean diesel versus hybrids is much, much lower. The average diesel car has a price premium of about one third of the premium for hybrid technology, although on the (currently) limited U.S. market, the two are closer. The spread is coming, though, as more and more come to market and sales increase.

The Volkswagen Jetta station wagon model sees 42mpg highway with a TDI engine. That engine also has a life expectancy of 300,000 miles or more and getting 500,000 is not unusual in Europe. Hybrid vehicles, by comparison, often require expensive battery replacements after 10 years and their gasoline engines have about the same life expectancy as normal gasoline cars – around 200,000 miles on average.

Even larger vehicles, such as pickup trucks and SUVs, can show impressive mileage numbers when using clean diesel. Many diesel model pickup trucks are getting 20-25mpg on the highway – a far cry from the former 12-16mpg a gasoline engine might have gotten just five years ago.

Is diesel the answer? For the near-term, it might very well be. Until new, cleaner technologies become more mainstream, diesel may be a better option than gasoline hybrid-electric vehicles. Some companies are stretching this to put TDI diesel engines onto hybrid drive trains, gaining the best of both worlds. In either case, the more expensive to refine, more dangerous to transport, and more polluting gasoline needs to go and diesel may be the comeback story of the century in that regard.