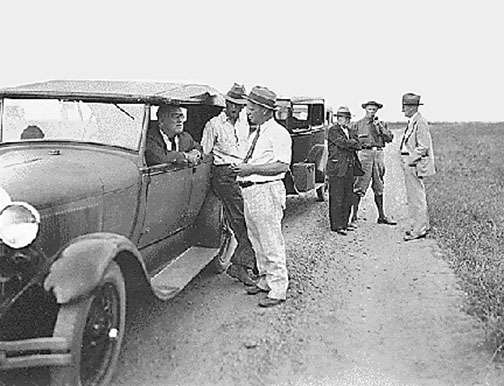 The candidates and their rides

What does your presidential candidate's personal vehicle tell us about him?
Advertisement

Our personal transportation is something that, uniquely, defines Americans like no other single item can. George Washington is most famously depicted astride his famous horse Nelson, whom the President kept until his death many years after the War. The modern president most associated with a car, however, is probably Franklin D. Roosevelt and his 1939 Packard 12 convertible with its roaring V12 engine and a stately look that only Packard could accomplish in that day.

Today, we have five men vying for the 2012 election to President, four Republicans and our sitting incumbent President Obama. Since cars are the way we Americans define ourselves, what does the personal vehicle of choice for your favorite in this election tell us about him?

Looking through the ballot in this way, it's obvious that things aren't that good for U.S.

President Barack Obama - nothing
Obama actually doesn't own a personal vehicle anymore, having given up his Chrysler 300 upon his move into the White House. Since he doesn't own or operate the presidential limousine, he is basically without a car. For Americans, it doesn't get much worse than this. On the other hand, for anyone who's gotten around D.C. lately, public transit is the way to go. No doubt Obama can tell you which bus to take to get to the Lincoln Memorial from 1600 Pennsylvania Avenue. Or not.

Newt Gingrich - Mercedes S-Class AMG S-65
The Newter gave up his Cadillac Escalade hybrid for a less green gangster-ish Mercedes. Buy American? F that, he can afford a real car now that he's got that fat Fannie Mae check. It's time to show off his 1% cred.

Ron Paul - Lincoln Town Car
If you're an old man who's every word and action epitomizes the term "conservative," then you need an old man car. Paul recently traded in his 1996 Buick for a new Lincoln Town Car. You read that right. He drove the same geezer mobile for fifteen years before finally trading it in for another rest home on wheels. One thing you can't argue with: Paul definitely walks the walk to follow his talk.

Mitt Romney - Ford Mustang GT convertible
Romney also owns a Cadillac SRX and a Chevy Silverado pickup truck. The Cadillac may fit his style, but honestly, the Mustang looks more like a midlife crisis mobile than it does the kind of car this slick conservative would really drive. Then again, Romney seems to have a thing for red, since he famously strapped the family's red Irish setter to the roof of their station wagon back in the day.

Of course, nothing beats a convertible muscle car when you need to run away from your own hot air and make an abrupt U-turn on a talking point.

Rick Santorum - Audi A6
This, of course, is his everyday car. He has also just announced that he'll be sponsoring the No. 26 Ford driven by Tony Raines in the Daytona 500 tomorrow. The car qualified for 41st position (out of 43), which is another parallel for Santorum's campaign: qualifying late in the game and coming in as the underdog; now we just have to see if the No. 26 ford will also make lunatic statements to pull itself further into the field.

Meanwhile, the Audi A6 speaks of luxury, stateliness, and the fact that Rick obviously doesn't tote his family around much. The "My other car is a school bus" license plate cover, though, hints at his more practical side.

Rounding up the choices
So who's your favorite? The guy who uses public transportation that you pay for, the midlife crisis U-turn man, the 1%er in his German machine, the old man in his geriatric ride, or the lunatic luxury driver with the closet school bus?

The choice is yours, but make it quick because November's coming up fast.