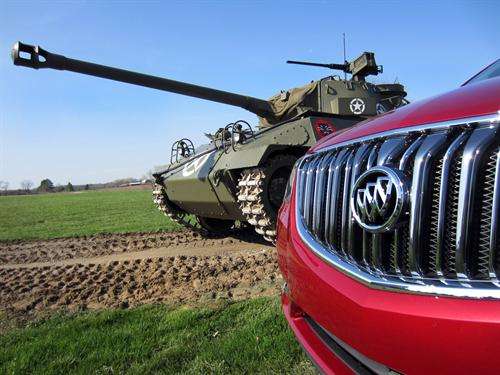 Tuesday was Victory in Europe (VE) day and to commemorate the day on Buick's 110th anniversary, the company turned back the clock to a time when heavy metal meant not loud guitars and big hair, but machines that sported huge guns and tracks instead of wheels. Yes, the Hot Rod of WWII was made by Buick, and now the M18 Hellcat rides again.
Advertisement

In February of 1942, Buick rolled the last civilian vehicle off its line and began retooling to engineer and produce aircraft engines, ammunition and a legendary vehicle to be designated the M18 tank destroyer, better known as the Hellcat.

Buick legend Harley Earl originated the design of the Hellcat; right down to the logo featuring a wildcat bearing down on crushed treads and the words "Seek, Strike, Destroy." The operational mission of the M18 was to destroy tanks and as such, it was a lightweight, lightly armored, powerful machine capable of fast maneuvering and carrying devastating firepower.

The M18 Hellcat weighed in at 20 tons, but was far lighter and faster than most of its targets, with a battlefield speed of 60 miles per hour (more than twice that of most tanks of the time) thanks to its 9-cylinder, 450 horsepower radial-type aircraft engine and 3-speed Hydramatic transmission. In fact, the Hellcat is more than capable of keeping pace with and outmaneuvering today's most advanced battlefield tank, the M1 Abrams.

Tankers quickly dubbed it the "Hot Rod" and forever after the war, it was remembered as the Hot Rod of World War II. Capable of riding at top speed over varied terrain, fording up to six feet of water, climbing small walls, and ramming its way through many structures, the M18 was a true tank, despite its relatively light size and armor.

Production of the tank killer began in 1943 and ran for just over a year as a top-secret project and it was so succesfully kept under wraps that it wasn't mentioned in any newspaper until a month before production finished. Not only was the Hellcat extremely successful in the war, but its design components continue to be used in military vehicles today, particularly the innovative suspension and crossmember system that held the tank killer steady even at high speeds with fast maneuvers.

During World War II, Buick's factories produced 2,507 of the Hellcats as well as nearly 20,000 powertrains for military vehicles, half a million cartridge cases, 9.7 million 20mm shells, and more.

Here's footage of a restored M18 Hellcat alongside a 2013 Buick Enclave for comparison: