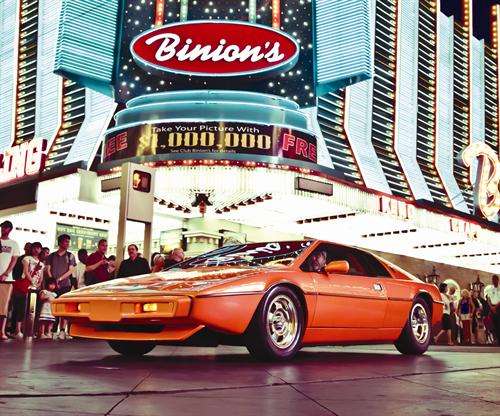 Budget Bond Cars - be James, but without the price tag

UK insurer Hagerty has released a list of the most affordable and attainable vehicles featured in the 007 franchise. Here's how you can get the cool factor without taking out a second mortgage.
Advertisement

Hagerty, best known for its specialty in classic car insurance for patrons in the United Kingdom, has released a compelling list of hot classics that have appeared in the James Bond franchise of movies. This car list, however, is not based purely on 007 coolness factor - it's a list of the most affordable in that genre.

So if you're a collector or aspiring to be one, what better car to have than one that was once featured by the King of British Cool, Bond.. James Bond? We've taken the liberty of converting the estimated auction value given by Hagerty from British Pounds to American Dollars.

1961 Sunbeam Alpine Series II ($15,600)
Featured in Dr No, this vehicle made it into the movie by virtue of its being the only sports car available on-site during filming in Jamaica. That doesn't diminish from the classic styling of this second series in the Sunbeam Alpine's progression. Made by the Rootes Group, this car originally sold for about $1,800 USD. About 20,000 of this version were made, starting in 1960 through to early 1963. While sporty to look at, the Sunbeam Alpine only had about 80 British horses under the hood and did 0-60mph in a leisurely 13.6 seconds. Still, it is a very sporty-looking car with distinctive 1960s styling.

1969 Mercury Cougar XR-7 ($23,600)
If you've ever wondered where the term "cougar", in its current connotation, comes from, look no further than In Her Majesty's Secret Service and actress Diana Rigg, who played Tracy Di Vincenza (Bond's future wife). She drove this car like a woman possessed and it received more screen time than any other car in the film - despite having never once been driven by Bond himself. The '69 was the "new body" of the first-generation (1967-1970) Cougar and the XR-7 was supposedly the more "European" of the car's trims and was by far the most luxurious. The price tag comes from the rarity of the Cobra Jet XR-7 package, which is what appeared in the film.

1971 Ford Mustang Mach 1($26,200)
Bigger, beefier, and coming standard as a fastback, this car entered the Bond series when Sean Connery returned for Diamonds Are Forever, his second-to-last Bond film. Like the Scots actor, the Mach 1 was a controversial beast, but won the hearts of collectors just as Connery won over the heart of Bond creator Ian Flemming.

1974 AMC Hornet ($1,900)
In what was to become a marketing bonanza during the last gasps of AMC's existence, the company managed to not just place the car in the Bond film The Man With the Golden Gun, but actually placed an entire Hong Kong dealership in the film, from which Bond commandeers a Hornet during one of the film's most exciting, pivotal scenes. Far from a sports car, the AMC Hornet remains an iconic 1970s "everyman's car" and 1974 saw about 30,000 of the 2-door version being built globally.

1977 Lotus Esprit S1 ($14,800)
Easily the most-recognized Lotus ever made, the Esprit S1 (Series 1) is also the most well-known Bond car outside of the DBS. You might remember it as the submarine car in The Spy Who Loved Me. While the actual submarine conversions made for the film are high-priced and much-coveted collector's items, the '77 Esprit S1 is a great car on its own. Despite having only a 4-cylinder, 2.0-liter engine behind the seats, the Series 1 was so light that four men could easily lift and carry it (mind the bodywork, please!). It's 2,205 pound weight meant that the tiny power plant was more than adequate for this most eye-popping of Lotus designs.

1980 Lotus Esprit Turbo ($18,500)
Of course, it's hard to go wrong with Lotus, but the S1 was really never seen as anything more than a "junior sporter" in sports car circles. So to take things up a notch, the Turbo was introduced and billed in For Your Eyes Only as a more souped up Q special for James to putter around in. In reality, the Turbo (not the same as the very limited edition Essex Turbo Esprit) was pure Formula 1 under the skin. It had the same 4-banger, but with a larger displacement and output, which meant a 0-60 of 6.1 seconds - a full 2 seconds faster than the (real) 0-60 time of the S1, which boasted about 6.5 seconds, but was really closer to 8 seconds. Chassis improvements were added to handle the new power and make the handling more adequate to a sports car. The Esprit Turbo didn't forget its 70s roots, though, as the interior sported disco red styling and a roof-mounted stereo from Panasonic. The movie actually featured two Essex-spec Esprits, but few know the difference between that trim level and the standard Turbo.

1981 Alfa Romeo GTV6 ($7,080)
Often touted as the ugliest car Alfa ever made, in 1981 it appeared in the Bond film most often tittered over when mentioning the title.. Octopussy. During a chase scene in the movie, stunt driver Remy Julienne showed that while the car might not be much to look at, the newly-developed V6 SOHC under its hood was popular with the motor press for good reason. While the engine had been a failure the year before in a car that was just too small to house it, it had found a good home in the GTV6; of course, Alfa having added Bosch injection and Dell'Orto carburettors didn't hurt either.

Remember that the prices listed are converted from British estimates. For the U.S. collector, some of these vehicles may be more or less expensive, depending on market availability.