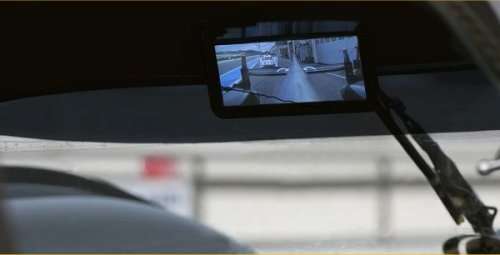 Audi planning to elminate side mirrors

Audi plans to remove the side view mirrors on their race cars.
Advertisement

Not to be dissuaded, though, Audi has found a use for the rear-view cameras normally only seen on concepts: race cars. In racing, arbitrary regulations that are decades out of date are rare. This is even more true in specialty racing like Le Mans.

Audi's latest R18 Le Mans (LMP) prototype features a rear view mirror in the cockpit that is not, well, a mirror. Instead, it's a color LED screen (specifically AMOLED) connected to a video camera housed in the tail fin. Similar to a back-up camera, it gives the driver a view of the losers (er... those behind) to help keep any of those upstarts from getting ideas about passing.

This could be a game changer in these races as currently, side view mirrors give only a very limited view of the rear and the closed cockpit and mid-engine mounting of Le Mans cars means no rear window (and thus, normally, no rear view mirror).

Could this become standard, eventually, and go beyond racing?

It's possible, but anyone who's dealt with government knows that it will take a long time to convince anyone to change the rules. Interestingly, backup cameras are becoming almost standard on vehicles (and will likely become required by law) and some car makers are going a step further. Infiniti has the Around View camera system, one of several in the industry now that are dubbed "Birdseye Cameras," which give a full 360-degree view around the car and which computer systems can use to not only self-park, but even give the driver a "bird's eye view" of the car from above (hence the name).

So it's almost certain that cameras are in our automotive future. What role they play, however, will depend on factors beyond just practicality and usefulness.