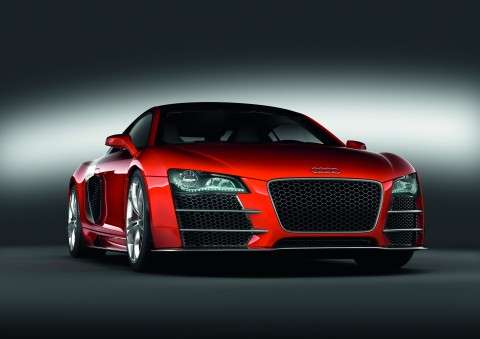 Audi may be plotting an R10 diesel-electric hybrid hypercar

Using its Le Mans-developed hybrid technology, Audi may be planning a surprise supercar they could badge as an R10.
Advertisement

Rumors are flying in the United Kingdom, finally removing some notice from Prince Harry and instead putting it on the sleepy manufacturing town of Crewe, where Audi lives. According to Autocar, insiders at Audi's headquarters are talking about diesel-electric hybrid "hypercars."

These insiders, say Autocar, say the new speedster would be badged an R10 and likely based on a combination of the R8 V12 platform teased in 2008 (pictured here) and the work being done by Audi's racing crews with their R18 e-Tron quattro hybrid racing machine.

That R18 used electricity generated from flywheels to power an electric motor mounted in each front wheel to improve the car's performance coming out of the curve - generating power on the slowdown into the curve and then pushing it back out again when accelerating out of the apex.

The V12 introduced in 2008 never came to fruition because, as Audi determined, the engine put out too much power and torque for the transmission in that small platform and was too heavy to gain advantage over a strong V8. Of course, the R8 platform is already well-vetted and understood by those who keep their eye on the world's top-tier street legal speedsters.

The R18 e-Tron Quattro was a hybrid version of the flag-taking R18 Ultra design, which has rocked Le Mans for years. Its flywheel regenerative braking system stores huge amounts of power in very short time frames - consider a car slowing from well over 100 miles per hour to about 70-75 miles per hour coming into a curve; in that short time period, the flywheel Audi tested could store over 500 killajoules (kJ) of power. It could then send that power back out in a burst to the electric motors nestled in the front wheels of the R18 e-Tron Quattro and pull the car out of the curve, making the car four-wheel-drive during one of its most unstable moments on course (leaving a curve). This hybrid R18 has done well for Audi in the Le Mans, unlike the KERS system Porsche attempted in Formula One racing.

Now scale that to a street legal R8-sized car with an already-powerful V8 diesel engine and you can imagine the kind of joy this could elicit for the person behind the wheel. At any slowdown or stop, the flywheel system could store power long enough to deliver it to electric motors to propel the car either alone or in tandem with a diesel engine.