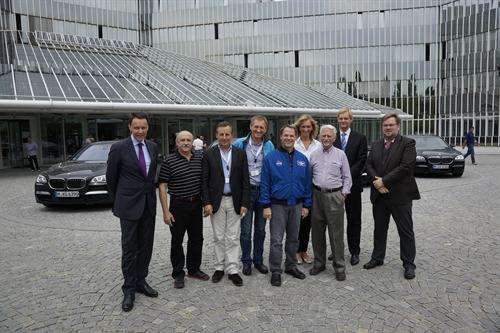 Astronauts and BMW come together for future sustainability tech

About 80 astronauts from around the world will converge on Cologne, Germany for the 26th Planetary Congress of the Association of Space Explorers (ASE), which will include a visit to BMW's Munich facilities.
Advertisement

The Munich facilities visit will include a tour and time with young professionals at BMW who are engaged in sustainable research, development and architecture at the BMW Group for talks about the future of sustainable transportation. One of the goals of ASE is to stimulate public interest in not only science and technology, but in the responsible and sustainable stewardship of our planet.

The tour and meeting will take place at the BMW Research and Innovation Centre and will include six astronauts from Germany, France, Russia and the U.S.A. to report on their current missions and discuss sustainable technology. Most of the discussions will center on fuel cell development and vehicle lightweighting, both of which are common to both BMW and spaceflight.

The Planetary Congress itself is co-hosted by the Houston, Texas-based ASE and by the German Aerospace Centre. Discussions range from human health and performance in and out of space, protecting the environment, and more. BMW is an event support sponsor, providing vehicles for transportation during the event. BMW has also been named the world's most sustainable car manufacturer on the Dow Jones Sustainability Index.

During their visit to Munich, astronauts Klaus-Dietrich Flade (Germany), Michel A. Tognini (France), Mary Ellen Weber, Kevin Ford and Dr Owen K. Garriott (USA) and Yuriy Usachev (Russia) will take part in a Community Day organised by the BMW Group’s VIP management together with other departments for young BMW Group professionals and for professional conversation with specialized engineers.

With hydrogen in particular, BMW has partnered with Toyota on the development of fuel cell technology and hydrogen storage systems, something which many space agencies are also heavily vested in terms of technology and R&D. Of particular interest to the astronauts as well will be the BMW i3, which will launch to market soon, with its lightweight carbon fiber-reinforced plastic passenger shell.