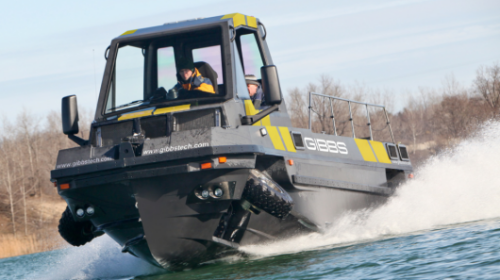 Amphitrucks - When driving on land is just not good enough

Detroit's Gibbs Technologies specializes in amphibious vehicles for commercial, personal, and military use. They have unveiled two new models of amphibious trucks aimed towards the specialty cargo market and search and rescue.
Advertisement

Gibbs Technologies has produced some little-known, but very popular niche vehicles that can rove on land and water, doing the kinds of things that most of us thought only happened in James Bond movies and television commercials for the military. The Aquada sports car is something straight out of a Bond flick while the Quadski is an ATV and personal water craft rolled into one vehicle. Now the company has two more vehicles for market.

The Humdinga is an SUV concept the company produced for search and rescue and military applications. It's now ready for production, this time called the Humdinga II (why mess with a good thing?) as a four-wheel drive sport utility truck capable of entering the water as well. The other is a new truck, meant for cargo hauling and larger-scale rescue missions, called the Phibian (pictured).

Both are "high-speed Amphitrucks", according to Gibbs, and both are basically the same truck with only slight configuration differences for specific applications. They're both 4WD and both travel at highway speeds on land without a problem. They can enter the water, retract their tires and wheels, and move across ponds, lakes, rivers, etc. at over 30 miles per hour. The Humdinga II can carry up to 7 passengers or 1,653 pounds (half ton) of cargo while the larger Phibian can carry up to 12 passengers or, if configured for cargo, up to a ton and a half (3,307 pounds) of supplies. The Phibian gives up some speed and maneuverability for the extra capacity.

The secret behind the Humdinga II and Phibian is the carbon fiber body work that makes it buoyant as well as the 350 horsepower V8 gasoline engine, supercharged for performance. When on land, the engine powers the wheels, moving the vehicle as any car would operate. When in the water, however, the wheels can be retracted (takes about ten seconds) and the engine automatically shifts to powering water jets that move the vehicle through the water at high speeds.

So if you're tired of just cruising the streets and want to add a new dimension to your travels, go amphibian.