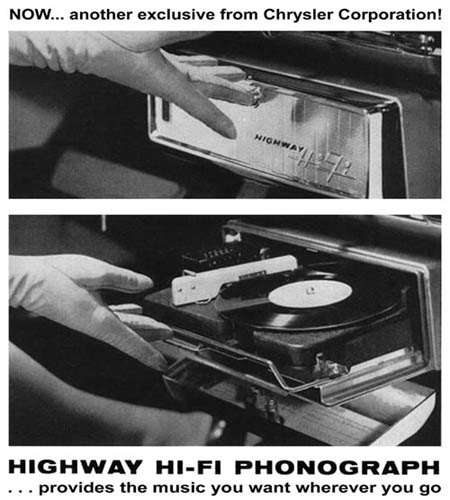 5 nutty and outrageous options in cars

Options are the little things car buyers add to customize their vehicle to suit their tastes. Throughout automotive history, there have been some crazy, stupid, and outrageous options available.. for a price. Here are five of them.
Advertisement

Since the auto was invented and we got past Henry Ford's "it comes in any color you want, so long as it's black" mentality, options are the thing we've most-often pined after when shopping for a car. Options make it personal, they add flavor, and they can often boost resell value too. Of course, options have also been a way for automakers to get a little off the rocker too.

Here are five options that are (or were) nutty, downright stupid, or just ostentatiously outrageous. Every one of them is or was a bonafied, factory-available option.

#1 - Highway Hi-Fi from Chrysler
Pictured above, this was a crowning achievement in 1956 for select Chrysler vehicles. The phonograph player fitted into a glove box-like slot and would swing out to allow you to slap on your favorite vinyl, set the needle, and enjoy the tunes until you hit the next bump. Crooner Laurence Welk pitched this one in Chrysler advertising, but to no avail. History does not record how many vinyl discs were destroyed by this bad idea.

#2 - Rear Seat Champagne Cooler from Hyundai
Not really known for "luxury" vehicles, Hyundai has worked hard to make a name for itself with its Equus in that segment. To that end, they offer a champagne cooler for the back seat. Thus Hyundai makes the dubious assumption that someone will be chauffeured in this luxury car. Can you imagine an Equus pulling up to the door of the Council on Foreign Relations and not being immediately impounded by security as a poseur?

#3 - The Starlight Headliner from Rolls Royce
There are actually a lot of far-out options for the Rolls, which makes sense considering some of their clientele includes Elton John and Al Sharpton. This one, though, takes the cake. It's not just "far out," it's really far out there. Like spacey. LEDs in the headliner turn the roof into a star scape without exposing the 1%er inside to the smog and unwashed masses by just opting for the convertible or a sunroof. At only $12,000, it's a tiny addition to an already hugely expensive ride.

#4 - Built-in Electric Razor from Chevrolet
In the heyday of great Chevy's like the Bel Air, in 1957 you could also order another exclusive option: a built-in, in-car electric razor. See? Shaving in traffic probably started right after someone figured out how to use something other than a straight razor to trim the night's growth. Although ruling out that some intrepidly suicidal idiot didn't try shaving with a straight razor in traffic is a little presumptuous on my part.

#5 - The Destroilet from Dodge
This wasn't available on a car, but it was part of a motor home. The Destroilet was an electrically-powered (or, alternatively, LP) incinerator that burned up your.. er.. leavings upon "flushing." The idea seems sound until you recall your miscreant youth and burning dog poop-filled bags. Yep, it stinks. A lot. The units weren't offered for long, but the company that made them, La Mere Industries, stuck around for quite a while with these beauties.

Got more dubious "options" for vehicles of past or present? Let's hear 'em!