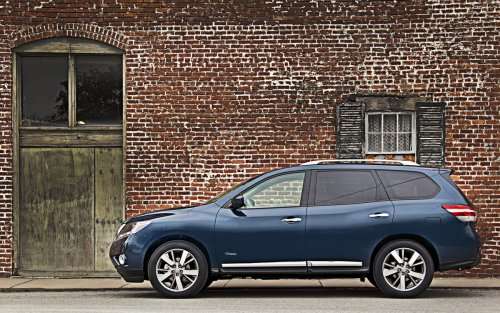 2014 Nissan Pathfinder gets a price tag, plus a Hybrid

With a new 2013 refresh and the introduction of a hybrid option for 2014, the Nissan Pathfinder is poised to continue its rapid sales growth and its new MSRP will only help.
Advertisement

Nissan has announced pricing for the 2014 model year of the Pathfinder SUV. The 2014 Pathfinder began entering sales floors earlier this week and is available at dealers nationally. With the 2013 model year refresh, Nissan saw Pathfinder sales increase by 201 percent over the previous year and plans to continue those phenomenal numbers with the introduction of both a strong lineup and a new hybrid option. MSRPs remain on par with last year.

The 2014 Pathfinder is available in four model variants in either two-wheel drive or four-wheel drive. All are powered by a 3.5-liter six-cylinder engine and the most towing capacity in its class along with best-in-class fuel economy in its 2WD base model.

Part of the Pathfinder's success has been the new Intuitive 4WD shifting and the selection dial for easily choosing 2WD and 4WD Lock options for the drivetrain. Setting the dial to Auto mode allows the Pathfinder to choose which is required for any given situation with on-the-fly shifting taking place at speed.

The 2014 Pathfinder is poised to continue to be one of the fastest-growing sales models in the 7-passenger SUV market. Later this year, a Hybrid model will be offered. It is expected to boost fuel economy by several points, especially for city drivers.