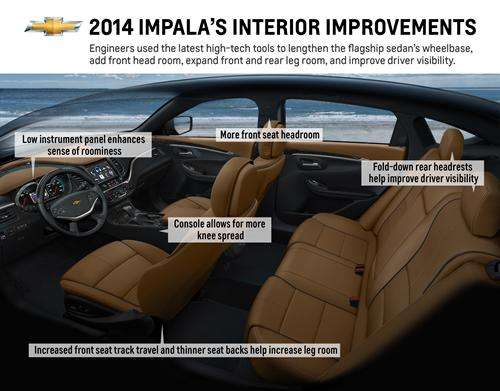 2014 Chevrolet Impala is roomier thanks to virtual reality

Virtual reality is responsible for the new, roomier interior of the 2014 Impala, says Chevrolet designers.
Advertisement

To accommodate "big-and-tall" customers requesting more space in the car, engineers used high-tech, virtual tools to re-think the interior of the 2014 Chevrolet Impala. A "spaciousness calculator" and virtual reality manifestations of the interior-in-progress gave them the ability to expand, whether by small amounts or large, interior and cargo space.

Using advanced computer modeling tools, digital human ergonomics models and a 3D Cave Automated Virtual Environment system - many of which are tools exclusive to General Motors - the Impala design team re-designed the interior of the car for the 2014 model year. 3D CAVE allowed the team to evaluate conceptual designs for not only spacial expansion and ergonomic changes, but also to analyze visibility and blind spots from an in the car perspective.

“Using various advanced technologies, we were able to make dimensional and design modifications in a virtual environment before locking down on a final architecture,” said Crystal Windham, director, Chevrolet passenger car interior design. “These steps are necessary to develop a solid foundation to build on to achieve the best spaciousness, comfort and overall design that will impress our customers.”

The enhancements to the 2014 Impala mean that it has two inches more driver legroom, a longer-reach telescoping steering wheel to give better adjustment for smaller or taller drivers, and a low instrument panel on the center console to increase knee spread for driver and front passenger. Despite the longer leg room in the front, rear seat legroom was also expanded by two inches thanks to the 1.2-inch wheelbase lengthening on the new 2014 Chevrolet Impala and its thinner-profile seating. The trunk was also expanded, giving a full 19 cubic feet of room - four golf bags with space left over.

Other visual enhancements were also added to further boost the feeling of a large interior. The low cowl and sweeping look of the dash makes it appear smaller than it is, creating an open feeling. Folding rear headrests and a thinner profile third brake lamp mean less intrusion on the driver's view.