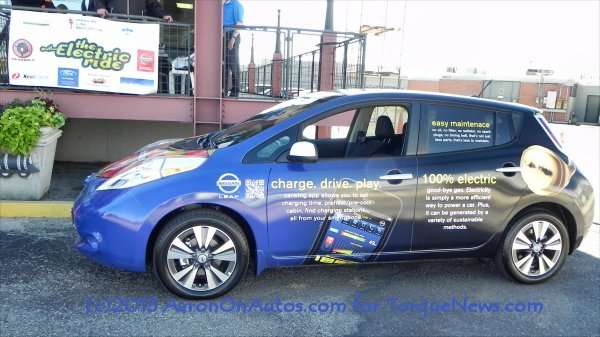 Torque News was given a sneak preview of National Plug In Day, which is this Saturday, September 28 around the nation, at an event in Denver, Colorado courtesy of Nissan, Ford, the American Lung Association and the Clean Cities Coalition.
Advertisement

This Saturday, September 28, is National Plug In Day presented by Nissan. At events around the nation, local dealerships from several automakers will be offering a chance for people to kick the tires and test drive several plug-in vehicles and learn about how the new electrification of cars is powering America into its automotive future.

At a press preview event at the historic Forney Museum of Transportation in Denver, Colorado, we were given a chance to sample some of the cars that will be at National Plug In ride and drives nationally. Cars included the Tesla Model S, the Ford C-MAX Energi, the Chevrolet Volt, and the Nissan LEAF. Also present was a local company, Boulder Hybrids, which converts Prius series hybrids to plug-in electrics (PHEV), giving the standard Prius a new electric range of up to 60 miles and up to 100 mpg in mixed driving.

Other sponsors include the Clean Cities Coalition, the American Lung Association, the International Brotherhood of Electrical Workers, the Regional Air Quality Council, and local sponsors like Xcel Energy and Denver Public Schools. The event is meant to raise awareness of the plug-in charging infrastructure available in many cities like Denver, the tax incentives and rebates available at both the local and national levels, and how well an electric vehicle, be it a battery-electric like the Model S or a plug-in hybrid like the Volt, can accommodate many people's lifestyles.

Also available is information from Clean Cities for local property owners and businesses about how they can improve their customer traffic and public image by offering plug-in stations for customers and employees. Incentives in Colorado, for example, include grants of up to 80% of the charging unit's cost in the Denver Metro Area. A total of twelve charging station suppliers/installers are in Northern Colorado and businesses like Walgreens, the New Belgium Brewery, Canopy Airport Parking, IKEA, Alfalfas Markets, and others have begun offering public charging at select locations. Nissan has also opened its dealership charging stations to public use and was on hand showcasing their new in-vehicle navigation system that shows where charging stations are, including level of charge and costs.

The highlight, of course, is test driving these innovative and fun vehicles. To see this many plug-in vehicles at once and realize how varied the choices are is surprising for those who aren't familiar with how electrification is changing automotive. While still a niche market and only a tiny percentage of the total automotive market, EVs are growing fast. From the high-end, luxurious and very powerful Tesla Model S to the low-cost, practical, and very "everyday" Nissan LEAF, the options are many.

For information on the Colorado National Plug In Day event, go to electricridecolorado.com. For events nationally, go to pluginday.com. Denver's event will be at South High School near Washington Park from 11am-3pm on Saturday, September 28th.