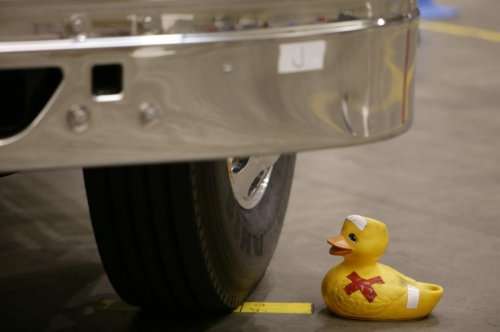 The finalists in the 2012 National Truck Driving Championships were announced this weekend after competing to win in each of nine categories.

The annual event is put on by the American Trucking Associations in Minneapolis, Minnesota and are considered the Super Bowl of Safety in the trucking industry. This is the 75th NTDC so far.

A total of 425 competitors arrived last week to compete and the field has been narrowed to just five in each of nine categories of trucking. These competitors were the state champions from each of the 50 states and are judged for their ability to maneuver their truck in tough situations, their ability to do so safely, and the speed with which they can accomplish both.

The overall winner in the competition is titled the 2012 Bendix National Truck Driving Championships Grand Champion and this year that honor goes to FedEx Freight's Don Logan from Topeka, Kansas. In both written and hands-on testing, Don beat out all others for the ultimate title in trucking. Don is a 25-year truck driving veteran with over 2.1 million miles on the road. This was his sixth trip to the NTDC and the third time he's placed. He succeeds Paul Phillips of Coarsegold, California, last year's National Grand Champion.

Robert Sutton of ABF Freight System and from Boise, Idaho was named the 2012 National Rookie of the Year for his showing in the 3-axle division. The Penn state team was the highest-scoring state overall, their 15th time doing so. Denis Litalien from Wells, Main received the Neill Darmstadter Professional Excellence Award for his participation in the 5-axle competition.

The contestants this year had a total of 604,122,031 accident-free miles amongst them. These are the cream of the crop in truck driving.

Here is video from the event courtesy of Con-way Freight:

Kevin E Duran sr wrote on May 9, 2017 - 10:16pm Permalink
I was second place in flat bed class in 2012. With Hannaford foods South Portland Maine. Why am I not listed as a second place winner