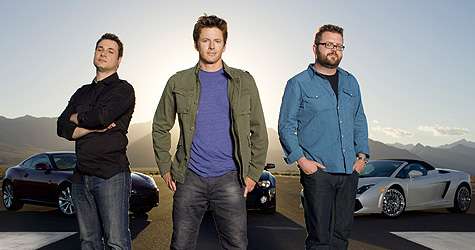 The moment some automotive fans have been dreading and others have been gleefully anticipating happens Sunday night at 10 p.m. when Top Gear America premieres on the History Channel. It's a USA version of the immensely popular BBC's Top Gear and the Yank version (as the Brits might say) stars drifting champion Tanner Foust, comedian Adam and Rutledge Wood, who does Speed Channel’s NASCAR coverage.
Advertisement

That seems to be the question on everybody's mind (well, at least the folks who are about such things). The qualified answer by John Pearley Huffman, writing in the New York Times, seems to be that Top Gear America doesn't suck and actually has its moments. As Huffman relates in his review of Top Gear America, "Indeed, the photography is gorgeous, the segments are well edited and the show seems ready for prime time."

Huffman also has a great paragraph about the three co-hosts: "When you hire three stooges, however, you don’t always get Larry, Moe, and Curly. Sometimes you get three Shemps. Or two Shemps and a Joe Besser. Still, while Mr. Ferrara, Mr. Foust and Mr. Wood don’t have the chemistry of {BBC hosts Jeremy] Clarkson, [Richard] Hammond and [James] May, what they have doesn’t seem like forced camaraderie. And even the British hosts needed time for their goony edge to gestate."

Here's a taste of what's to come, according to Huffman, and what the studio audience thought: " It is not yet as polished, provocative or hilarious as the British version. But when Mr. Foust races a Mitsubishi Lancer Evolution down a ski slope against stunt skiers, the segment is not the only novel, it is thrilling. And any show that pits a skydiver against a Ford Raptor pickup in a race has a grip on its own lunacy. The best indication that the studio audience saw something worthwhile was the fact that, despite no chairs, no pay, minimal irrigation and hard-to-find bathrooms, no one left until the six-hour taping was finished."

Two friends of mine are working behind the scenes on the show: Aaron Gold, the About.Com guide to cars, and @indepthauto on Twitter.

Tesla Contemplates A New Strategy for China Retail even As Sales Boom
Jay Leno on Elon Musk & EVs: “I Think He Should Get ... Credit"
END_OF_DOCUMENT_TOKEN_TO_BE_REPLACED