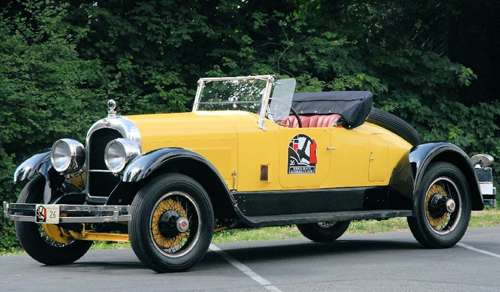 With its opening less than eight months away, LeMay – America's Car Museum returns to the Seattle Auto Show with three outstanding cars, including a a 1926 Marmon – fresh off the Pebble Beach Motoring Classic – a 1972 El Camino and a recently acquired A-1 Grand Prix Team USA Lola Formula Car.
Advertisement

The Seattle Auto Show runs from Nov. 2 to Nov. 6 at the newly renamed CenturyLink Field Event Center. This will be the fifth consecutive year ACM, the four-level, 165,000-square-foot facility that officially opens next June in Tacoma, has had a display at the auto show.

The 2011 Seattle Auto Show will offer up-close-and-personal looks at more than 400 vehicles from foreign and domestic manufacturers. The world's automakers are bringing the best of their best to Seattle, from exotic supercars to thrifty compacts, muscle cars to the toughest trucks, family sedans to speedy sport cars.

What might be the most intriguing aspect of the show is the State Farm Drunk Driver Simulator. It uses 3D graphics, seat movement and forced feedback steering to create a virtual drunken driving experience. On a more sobering note, there will also be test drives from Ford, Toyota, Hyundai and Kia.

“We’re always looking for great automobiles to display at the Seattle Auto Show, and ACM has never disappointed,” said Jim Hammond, show manager and executive director of the Puget Sound Automobile Dealers Association. “We’ve always had a great working relationship with ACM, and we’re very enthusiastic about having a top-tier auto museum opening in the Pacific Northwest.”

According to the LeMay museum website, the 1926 Marmon D-74 roadster featured an in-line six. Nearly 4500 of were sold in 1926 at a cost of over $3000. Marmon went on to produce a V16 automobile in 1931. The Marmon discontinued automobile production in 1933, the worst year of the Great Depression. ACM's Marmon's 2-passenger roadster body style had been discontinued and not offered in the 1926 Marmon Catalog, but the few remaining bodies left over from production were available as a special order. More than 250,000 Marmons were made but only about 350 remain in existence.

The 1972 Chevy El Camino can rightly be considered a great automobile because one from that year was reportedly owned by Frank Sinatra. Former President Bill Clinton had a 1970 El Camino that he lined in astro-turf for reasons he wouldn't quite explain. Let's just say that astro-turf is easier on the knees than metal.

“Our museum was built to highlight America’s 100-plus year love affair with the automobile,” said Scot Keller, ACM’s chief marketing & communications officer. “There’s no better way for car enthusiasts to get a sense of what’s coming than by visiting our 900-square-foot exhibit at the Seattle Auto Show. The three cars being displayed exemplify the breadth of our collection.”

LeMay – America’s Car Museum, set for a June 2012 opening in Tacoma, Wash., explores how the automobile has fulfilled a distinctive role at the core of the American experience and shaped our society. The spacious Museum with rotating exhibits is designed to be the centerpiece for automotive history as well as an educational center and library. The campus also contains a 3.5-acre show field, theatre, café, banquet hall and meeting facilities.