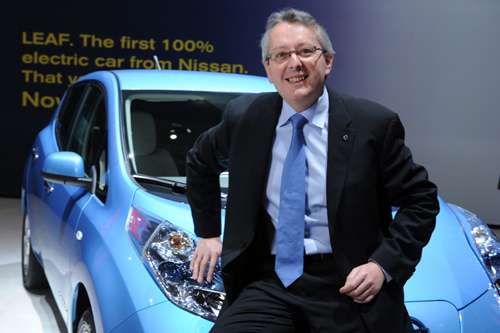 With competition heating up from such manufacturers as Kia and Hyundai who are combing great design with affordable products, Nissan is looking to shake things up with the announcement of Pierre Loing as the new product planning vice president for Nissan Americas effective Jan. 1.
Advertisement

Nissan Americas has tapped a European veteran to fill the role of product planning vice president. Loing will be responsible for advanced and product planning for all Nissan and Infiniti vehicles throughout the Americas.

"Pierre has flourished during his tenure running Product Planning in Europe, overseeing major successes such as the Qashqai and greatly boosting Nissan's presence in Europe," said Carolin. "Due to a combination of his sporting passion and dedication, Pierre has worked tirelessly to place Nissan in high regard within the European market. We are excited to welcome him to Nissan Americas."

Most recently Loing, 51, was vice president, Product Strategy and Planning for Nissan Europe. In this role he has been responsible for all near-future Nissan products. In addition to the Qashqai, Loing played key roles in the development of other high-profile vehicles including the Nissan LEAF, the world's first and only all-electric, zero-emissions vehicles for the mass market.

The Qashqai is a huge product for Nissan all over the world with global sales that have surpassed one million units. The Qashqai is also known as the Dualis in Japan and in other markets.

According to the Nissan Media website, "Launched in the European market in March 2007, Qashqai made its debut during the same year in Japan followed by Africa, the Middle East, Oceania, Asia, and Latin America. Without exception, all regions have praised Nissan's new model for its high quality and strong performance.

"Starting from Europe, the Qashqai brought something new to the market with its strong, distinctive design and product concept. Sitting between the style of a more traditional hatchback and a more robust, elevated SUV shape, Qashqai merged the best of two worlds capturing the car-buying public's imagination. Updated in March 2010 with refreshed design and improved fuel economy and CO2 emissions, it continues to enjoy strong sales, and has been a mainstay of Nissan's European lineup for four consecutive years.

"Moreover, it has won several ‘Car of the Year' awards in numerous countries, and this year, was ranked third by ADAC, Germany and Europe's largest automobile association in it's Yellow Angel award category for quality. It was the only import car model to receive this distinction as one of the most reliable cars in Germany."

The closest equivalent that Nissan has in the United States would be the Rogue, which is a greatly under appreciated crossover. Maybe Loing's presence in the U.S. means the Qashqai will be coming here in some iteration. It seems a logical step considering the vehicle's worldwide appeal.

Loing joined Nissan in 1999. Prior to taking on his current role at Nissan Europe in 2006, Loing was general manager, Advanced Product Planning, NML and based in Tokyo with responsibility for projects ranging from six to eight years into the future. In 2002 he joined Nissan from Alliance-partner Renault where he was general manager of Product Strategy in Paris and a prominent contributor to the Alliance between Nissan and Renault.