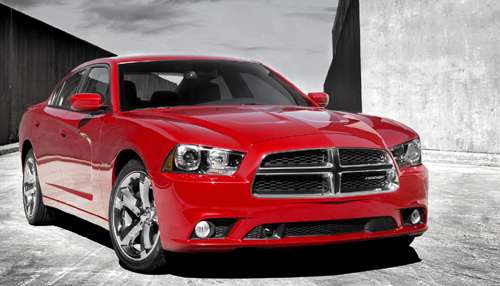 Dodge has managed to extend the sports car design DNA of its now iconic Dodge Challenger across its entire 2011 lineup with major changes to the Charger, Grand Caravan and Journey. At the same time it delivers an air of refinement to its interiors that had long been lacking. Models such as the Charger and the Grand Caravan are no longer just beautiful on the outside. They have become complete packages – something that the brand has been lacking for years. Dodge is no longer the ugly duckling at Chrysler.
Advertisement

Holy Crap. It's a Dodge

Ralph Gilles, the president of Dodge, is setting about to change all of that. He is not your typical portrait of an automotive executive. He dresses fashionably (probably thanks to his design background) and emanates an air of hipness. Plus he’s an engaging speaker who speaks passionately about his product line – even products like the Dodge Journey, a crossover previously best known for its reliability, yet blandness.

In describing the Journey to a gathering of media at a warehouse on the San Francisco waterfront, Gilles boasted that people will be impressed so much by its interior that they are going to proclaim, “Holy crap. It’s a Dodge.” When’s the last time you heard somebody speak passionately about a Dodge interior – and the sentiment was correct?

The Dodge Charger
The Charger in its previous generation was a squat, muscular sedan that found some favor as a police cruiser. It was a good car that generated a thrill for a short time when behind the wheel but offered little sustainability in its appeal. For 2011, its hoodline has been lowered, the bodyside sills have been flared, the wheel openings are tightened and the windshield has a faster sweep to it.

There are two major improvements to the Charger for 2011: the powertrain and the interior. Lets get the latter out of the way first. The previously hard, plastic interior has been replaced by soft-to-the-touch surfaces. It is an immensely comfortable car for both passenger and driver thanks to performance-contoured seats with dual-density foam and a new spring suspension.

The good news is Dodge hasn’t taken the soul out of the Charger with its softer interior. Step on the accelerator and you’re going to be pleased with the results from the new 3.6-liter Pentastar V-6. It delivers 292 horsepower, which is a 63 percent improvement and 260-lb. ft. of torque (up 36 percent) from the previous generation 2.7-liter V-6, an almost emasculated engine considering the Charger’s tough boy stance. This is going to be all the engine you will reasonably need in a Charger. Of course, it still comes with the 5.7-liter HEMI V-8 that puts out 370 horsepower and a 0-60 mph performance of less than six seconds.

Handling is much improved, too. In twisty roads between San Francisco and Napa Valley, the Charger displayed a lot of grace. It planted itself well in corners and handled twisty roads well for its size. It’s no BMW 5-series but it is an affordable alternative until your lottery ticket comes due.

The Dodge Journey
I had the pleasure of driving the Journey in Spain last summer and said then that its emphasis was more utility than sport. For 2011, the Journey receives a major overhaul with a completely redesigned and retuned suspension, the Pentastar V-6 and an interior that will make you gush like Ralph Gilles.

That new V-6 engine is an example of modern technology becoming so prevalent in the automotive industry: 20 percent more power and better fuel efficiency. It delivers 283 horsepower and 260 lb. ft. of torque. It’s mated to a six-speed transmission and can be either front-wheel or all-wheel drive. A base 2.4-liter inline-four cylinder engine is available with 173 horsepower, 166 lb. ft. of torque, and a four-speed automatic transmission.

Forego the base model if your budget allows. The V-6 that was available for drives around Northern California is a more engaging engine choice. You won't be disappointed.

Among the interior highlights are a new, larger cluster with standard electronic vehicle information center with a full-color display that is backlit (in what else?) Dodge red. One nice touch that I appreciate because of my standard driving position (legs akimbo) is the integrated center stack is less angular, which makes more room for my knees. The driver and front passenger will enjoy the extra cushion on the center console.

The Dodge Grand Caravan
Dodge invented the minivan segment way back in 1983. Interestingly, it's the children born since then who know are expressing an interest in driving minivans after Gen X and Baby Boomers ditched them in favor of sport utility vehicles (and manufacturers lusted after the easy profits from SUVs).

The Grand Caravan shares a powertrain with its stablemates - the V-6 Pentastar - and reports similar horsepower and torque numbers with the Dodge Journey. It's got all the zip moms and dads could want out of a vehicle that has precious cargo strapped in the passenger seats.

Among the exterior changes are a new front fascia that has a split crosshair grille combined with a new hood and quad headlamps. The rear liftgate is also more sculpted and the Grand Caravan now has LED taillamps. Grownups in the second row will appreciate the larger Stow-N-Go seats that are easy enough to fold with one finger (a child could really do it).