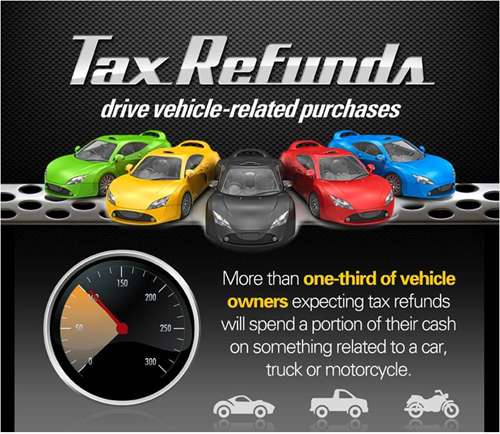 It Might Surprise You What Folks Do with Tax Refunds

It seems like when it comes to cars and tax refunds, money just burns a hole in our pockets. That could help explain why more than one-third of vehicle owners plan to spend a portion of their tax refund on their car, truck, or motorcycle, according to an eBay Motors survey.
Advertisement

According to the survey, 34 percent of current vehicle owners expecting tax refunds said they will spend part of their refund money to buy new or used cars or trucks, or spruce up their current vehicles. The categories in which the most people intend to put their tax refund dollars toward are:
1. Maintenance (49 percent)
2. Repairs (32 percent)
3. Buying a new or used vehicle (21 percent)
4. Tires (19 percent)
5. Cleaning or detailing (14 percent)
** Survey respondents were able to select multiple options

According to the IRS, the average federal tax refund is $3000. That's not going to buy you a new car. It is going to make a nice down payment but that money could go a long way towards spicing up your current ride.

According to the survey, on average, respondents who expect to spend at least some of their refund on a vehicle or parts and accessories plan to put 31 percent of this year’s refund toward a vehicle-related expense. In addition, 42 percent of respondents say they plan to take automotive-related deductions when they file their taxes.

“The survey findings support the trends we have seen over the past few years in relation to sales and search increases on eBay Motors over the course of the Tax Season,” said Gregory Boutte, vice president of eBay Motors and Electronics in North America. “This increased activity speaks to the selection and value people have come to associate with eBay Motors. With more than 22 million parts available on the site at any given time, eBay Motors is the place where people looking to spend refund dollars can find just about anything they need for their vehicle, whether they’re shopping online or from their mobile devices.”

In 2010 and 2011, total searches for parts & accessories on eBay Motors during Tax Season (March and April) grew 17 percent and 23 percent, respectively, when compared to the average number of searches in other months of the year. As a result, sales of parts and accessories have also shown growth during the tax season in prior years. Tires and wheels have traditionally been the most popular tax-season accessories eBay shoppers purchase for their vehicles. Other popular items include grilles, motorcycle parts, and motorcycle accessories, including jackets, leathers and helmets.

In addition to parts, people appear to be putting their tax refunds toward their summer pastimes. In 2011, top non-traditional and motorsports vehicle sales on eBay Motors during tax season included Honda ATVs, Harley-Davidson Softail motorcycles, and Bass fishing boats.

Further, Americans appear to view tax refunds as opportunities to make purchases of vehicles associated with the joys of driving. The search terms on eBay Motors that have shown the greatest increase in frequency during the past two tax seasons are motorcycle, sports car and exotic-related vehicles, such as: Harley-Davidson, Corvette and Mustang.

People will also be shopping eBay Motors via their mobile devices this tax season. More than 173,000 parts and accessories and 3,400 vehicles are sold each week through eBay mobile applications. These purchases include high-ticket items – the most expensive motors related mobile purchase on eBay mobile applications in the U.S. in 2011 was a Lamborghini Gallardo, purchased for $249,999. People can visit Mobile.eBay.com to learn more, and download eBay applications, including the eBay Motors iPhone app.

People who plan to spend part of their refund on their vehicle this tax season can get even more for their tax refund dollars by visiting eBay’s Uncle Sam’s Garage, a site offering rebates and sales on wheels, rims, tires, turbo kits and more throughout the tax season. The garage is open now through April 17.

*The Harris Interactive online survey was conducted February 13 and 15, 2012, and was weighted to reflect the composition of the adult population and to adjust for the respondents’ propensity to be online.

So, what do you think? When that check comes in from the federal government are you going to spend it on your car? Comment below and let us know your plans.