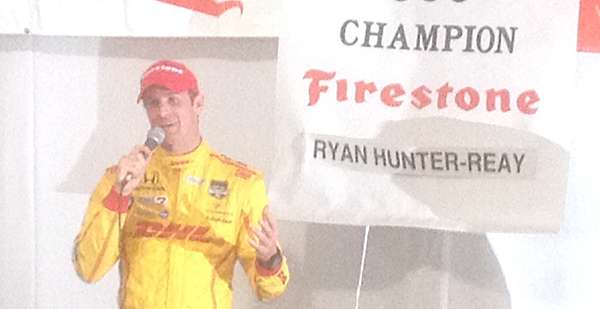 The second-closest Indy 500 ever was run by and Ryan Hunter-Reay in an exciting finish to a great race. Lets recap the experience that was provided to TorqueNews by Firestone, the tire provider to the Indy Series and our host for a special trip.
Advertisement

I'm not here to give a recap of the race because that's available on thousands of websites around the world. Instead, I'm here to provide a behind-the-scenes look you can't garner from television or the Internet.

About three hours after his victory, Hunter-Reay stopped by the Firestone chalet to speak to the assembled horde of hardworking retailers, employees and moochers, I mean the media, like me. He's visibly exuding exhilaration over his first Indy 500 win that propels him to the top of the Indy Series standings.

Hunter-Reay starts off by playing to the Firestone crowd. "If you watch a lot of other racing series they have problems and we don't with our tires. My life is at risk and I can't thank [Firestone] enough for the state of mind for me to push it to the limit and give you a great race," he said.

Hunter-Reay, the first American Indy winner since 2006, talked about how he won the race that really turned into an 8-lap shootout thanks to a late red flag. "At the end of race you race a lot harder," he said, adding that the leader usually races a lower line to prevent being passed. Hunter-Reay thought he had lost the race when Helio Castroneves passed him late. But then he was able to fake him with two laps to go and Castroneves fell for it.

The late red flag didn't please Hunter-Reay because there's always a risk of an engine not restarting after being run for almost 480 miles. But it did and in the end he spoke about his respect for the other racers and how difficult their job is with the combined open wheels, open cockpit and danger lurking around every curve.

Inside the track, the traditional beverage for the winner is a bottle of milk. Inside the Firestone pavilion, it's a bottle of champagne. Hunter-Reay took it, shook it, and sprayed the execs and guests in the front row with a shit-eating grin plastered on his face. Then, the director of motor sports for Firestone handed him a second bottle and he did it again. Not sure if that's how things are done every year but it was fun to see.

Another great perspective on the race was provided by team owner Michael Andretti who addressed the Firestone faithful before Hunter-Reay stepped up. He was elated that his team took four of the top six spots in the race but admitted, as a dad, he was sad to see his son Marco come away empty handed after running a great race that saw him finished third after leading it in various stages.

Andretti said he had a lot of confidence in spite of Hunter-Reay starting in the 19th position. Top that off by the fact he had to replace his engine on Saturday and had limited track time with it. The last 50 laps were an all-out sprint, he said, with Hunter-Reay's late pass being too difficult for Castroneves to overcome.

Here are some last-minute observations from today's Indy 500