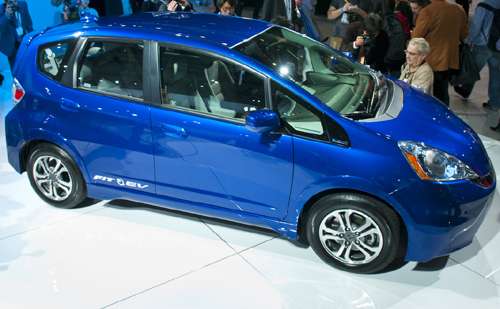 The 2013 Honda Fit EV, which was unveiled at the Los Angeles International Auto Show, got delivered to its first customer: the City of Torrance, Calif., where somewhat coincidentally, Honda just happens to have its North American headquarters.
Advertisement

The delivery of the battery-electric vehicle is one of the first major steps in the Honda Electric Vehicle Demonstration Program, which Honda calls "a prelude to the retail market launch of the Fit EV with customers in California and Oregon this summer."

"This is an exciting day as we take another important step toward Honda's comprehensive vision for reducing CO2 emissions while at the same time advancing our relationship with the city of Torrance," said Steve Center, vice president of the Environmental Business Development Office at American Honda. "Honda has a long history with electric vehicles starting with the introduction of our first battery-electric car, the EV Plus, nearly 15 years ago. With Honda's extensive experience and the real-world feedback from the city of Torrance, we will be even more prepared for the further customer adoption of electric vehicles."

Over the past year, Honda and the city of Torrance have worked together to gather input from Torrance residents about potential recharging station locations and jointly participated in numerous public awareness events with a Fit EV test vehicle. Honda and the city will continue to further these initiatives while also studying local government fleet usage of an electrified vehicle. The city of Torrance will also receive a Honda plug-in hybrid for additional testing at a later date.

Honda unveiled the 2013 Fit EV at the 2011 Los Angeles Auto Show and announced plans to begin leasing the 123 city-mile per charge (76 mile range combined adjusted city/highway) battery-electric commuter vehicle to its U.S. customers in the summer of 2012. Equipped with a 20 kWh lithium-ion battery and 92 kW coaxial electric motor, the Fit EV battery can be fully recharged in as little as 3 hours when connected to a 240-volt circuit.

Just like manufacturers are locked in a battle for ever increasing horsepower, automakers are also battling over quick charging times. One of the great knocks against EVs is the amount of time it would take to recharge one when the juice runs out. A time below 3 hours begins to make it more appealing to commuters who can comfortably charge their cars while at work.

As part of the Honda Electric Vehicle Demonstration Program, Honda will test the 2013 Fit EV with Google Inc. and Stanford University, in addition to the City of Torrance. Each program participant will provide Honda with real-world feedback on the Fit EV. Individually, each participant will use the Fit EV to further initiatives such as research into human behavior and various usages like personal, fleet and car-sharing.

Toyota's First EV Will Have a Name of BZ: Toyota BZ
First Videos From Inside The Boring Company's Las Vegas Loop
END_OF_DOCUMENT_TOKEN_TO_BE_REPLACED