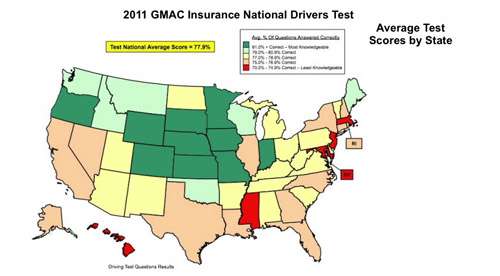 The annual GMAC Insurance National Drivers Test has settled it once and for all: men are better drivers than women, at least when it comes to knowledge of driving laws.
Advertisement

If driving knowledge is any indication of driving habits, men are better drivers than women, according to the GMAC Insurance Test, which found that 1 in 4 women failed the test (27.2 percent versus 13.6 percent for male). Overall, males outperformed females with an average score of 80.2 percent versus 74.1 percent for females.

Have a question about your driving skills? You might want to ask somebody from Kansas because apparently they have the smartest drivers in the country, according to the GMAC Insurance National Drivers Test. The dumbest drivers in the U.S.A. can be found in Washington, D.C., where the average test score was 71.8 percent. Kansas drivers, by comparison, scored 82.9 percent on the quiz on average. This correspondent scored 80 percent on the quiz, but disputes a couple of the answers. Take the test yourself to find out at the GMAC Insurance website. (The test is on the right-hand side of the home page.)

The Pacific Northwest is a smart area of the U.S.A. with the states of Washington, Oregon, Idaho and Montana all averaging above 80 percent. Wyoming and Colorado were also above 80 percent, too.

Bristol Palin's decision to move from Alaska to Arizona has apparently hurt its rankings considerably. Alaska plummeted 30 spots from tenth place in 2010 to 40th place this year. Their average test score decreased from a 79.8 percent average to a 76 percent average.

The bad news according to the GMAC Insurance National Drivers Test is 36.9 million American drivers may be unfit to drive when results are extrapolated from the test. The chart that accompanies this story should make you leery of drivers from any red state, which indicates below 74.9 percent.

The average score of all drivers increased from 76.2 percent in 2010 to 77.9 percent this year, but results suggest that a great number of people on the road still lack basic driving knowledge, which can lead to dangerous driving habits, according to a GMAC press release. Eighty-five percent could not identify the correct action to take when approaching a steady yellow traffic light, and only a quarter were aware of safe following distances.

When you approach a traffic signal displaying a steady yellow light, you must:
Go through the intersection before it turns red
c-Stop if it is safe to do so
x-Be prepared to stop
Slow down and proceed with caution
OK, so I erred on the side of caution here. I remember doing the same thing on my last driver's test.

A diamond shaped sign means:
x-Yield
Stop
c-Warning
Meh, what can I say? I plain didn't know it.

So, I feel like my test score should have been 85 percent, which makes me smart enough to live in Kansas. By the way, I thumped my fellow Connecticut residents who only averaged 76.7 percent.