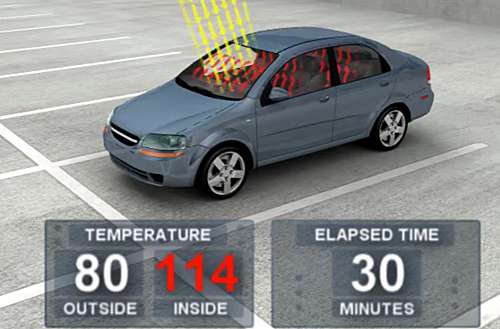 The tragedy of kids dying in hot cars can be avoided with smart advice from GM and Safe Kids USA.
Advertisement

GM, in conjunction with the child safety group Safe Kids USA, has created a video that is chock full of advice for parents and others who transport kids in warm climates. The advice could prevent a child from dying from hyperthermia.

As part of a nationwide campaign launched earlier this year, NHTSA and Safe Kids are joining safety advocates at events around the country to urge parents and caregivers to think "Where's baby? Look before you lock."

“This campaign is designed for parents and families with young children, but it applies to everyone in communities nationwide who care about the safety of children," said U.S. Transportation Secretary Ray LaHood at an event in Orlando, Fla. “We hope that the simple tips from this campaign will save lives and help families avoid unnecessary heartache.”

Don't get lulled into thinking this couldn't happen to you. A surprising tidbit of information from the video is the temperature only needs to hit 75 degrees before the inside of your car quickly hits 100 degrees. The video below shows how quickly a car can heat up.

As the GM video reports, " … many parents are legitimately unaware of how dangerous a car can become for a small child in just a few minutes. On a 75 degree day, the interior of a vehicle can reach over 100 degrees in about a half hour. Studies show that the interior temperature will continue to increase about 45 degrees every hour.

It's a serious safety issue. Last year, more than 30 children died in 2011 as a result of hyperthermia (or heat stroke.) According to data from The Department of Geosciences Of San Francisco State University, 527 children died after being left alone in a sweltering car since 1998.

To prevent tragedies from happening again, child safety engineers at General Motors are working with Safe Kids to provide tips for parents ahead of summer to avoid any unnecessary deaths as a result of hyperthermia.

As Kate Carr, president and CEO of Safe Kids USA points out, you should worry about heat stroke every month of the year. Sure, people in Northern climates may ot have to worry in January but that doesn't mean it's not a problem south of the Mason-Dixon line any time of the year. The more than 500 heat stroke cases in the last 14 years have happened in 11 months of the year and across every state.

James Bell, Head of Consumer Affairs, General Motors, said it's also important that parents take responsibility for keeping children out of cars. That means keeping cars locked when parked in the driveway and not letting children have access to car keys without adult supervision.

Bell has an observation any of us love cars know too well. "It's inevitable that kids like to play in cars because it's fun. But as parents it's our responsibility to keep them out because that can become a very dangerous place very quickly."