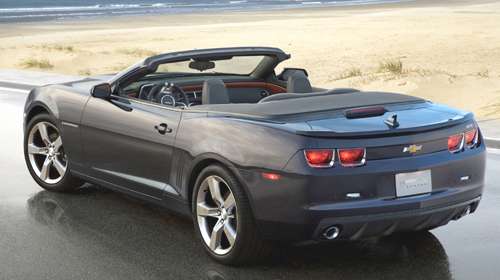 Chevrolet Camaro returns after a decade to 2011 Frankfurt Auto Show

Visitors to the 2011 Frankfort Auto Show will be greeted by an unusual site: the first Chevrolet Camaro to appear at the show in a decade.
Advertisement

German auto buyers will be able to purchase either the Chevrolet Camaro coupe or convertible but that might wish they were paying U.S. prices instead of German. The coupe starts at 38,990 Euros ($53,158) and the convertible starts at 43,990 Euros ($59,975) – both are German prices. The tariff might be different in other European countries.

It will be interesting to see how the Camaro plays in Europe. After all, its initial appeal in the U.S. had a lot to do with its retro appeal. Maybe '60s retro will play in Europe.

Europe is an important market for Chevrolet – maybe not China important, but still important. After re-launching the brand in Europe in 2005, Chevrolet more than doubled its sales to more than 500,000 in 2008. In 2010, Chevrolet grew its market share in Europe to 2.5 percent, selling 477,194 cars. That means about 1 of every 8 Chevrolets sold worldwide is sold in Europe.

Not a Camaro fan? Don't feel bad. Not everybody is. Well, there's also something for Corvette fans. On the press days, a real Corvette engine will be assembled during the Corvette Engine Build Experience at the Chevrolet stand. This unique program is also offered to customers purchasing a Corvette ZR1 or Z06, giving them the ultimate opportunity to personalize their car. For €4,027 they will build their Corvette's engine at the prestigious GM Performance Build Center near Detroit, Michigan (excl. VAT, incl. travel and accommodation).

There are other major debuts taking place by GM at the Frankfurt Auto Show that will mostly garner the attention of Europeans. There will be the European premiere of the new Malibu. It will be Chevrolet's new top-of-the-range model on the continent as of 2012. Sporting a fresh exterior and equipped with powerful 2.0-liter diesel and 2.4-liter gasoline engines, the Malibu will offer an alternative choice in the mid-size sedan segment.

Two concept cars that will be making their European debuts at the Frankfurt Motor Show are the Chevrolet Miray roadster and the Colorado Rally concepts, an adventure themed pickup truck.

Chevrolet will also be highlighting the 1.3-liter turbo-diesel Aveo in Frankfurt – a car Americans bid good riddance to in favor of the Chevrolet Sonic. There is a 95 hp Eco variant and a 75 hp variant that powers Europe's most fuel-efficient sedan.

Two months ahead of its European market launch, the Chevrolet Volt electric vehicle with range extender will be on display at both at Chevrolet stand and in Hall 4. The award-winning Volt will also be available for test drives for press and public.

War of the kiosks at 2011 Frankfurt Motor Show

Tesla Contemplates A New Strategy for China Retail even As Sales Boom
Jay Leno on Elon Musk & EVs: “I Think He Should Get ... Credit"
END_OF_DOCUMENT_TOKEN_TO_BE_REPLACED