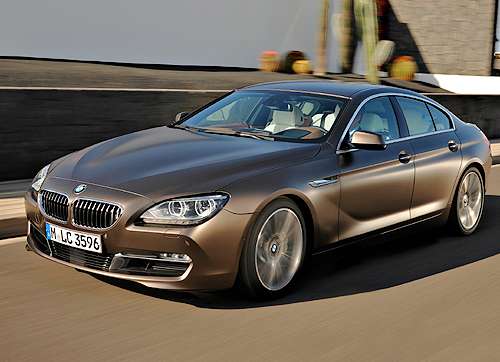 Announcements of new vehicles are typically launched during the week when car fans are sitting at their work computers but BMW has made the stealth announcement of its 2013 BMW 6 Series Gran Coupe over the weekend and it's a shame because the world needs to learn about this car – a much needed upgrade of the BMW 6 series coupe.
Advertisement

The BMW 6 series coupe is by most definitions a great vehicle but it's just too damn big for a coupe. Simply put, it's bloated but it's going to work great as a four-door coupe. People blanched when Porsche introduced the four-door Panamera. They should rejoice at the 2013 BMW 6 Series Gran Coupe.

No pricing details have been announced for the new four-door coupe. However, a reasonable estimate would be $77,600 based on a $73,600 starting price for the 2012 two-door version. Expect this car to be unveiled at the North American International Auto Show in Detroit in January.

Speaking of the Panamera, the 6 series Gran Coupe is a belated reaction to that four-door coupe but seems more directly to be a response to the well-received Audi A7. It's as if BMW wasn't willing to accept the response to the Panamera but figured it was time to get serious when the A7 made such a splash.

In one of the great PR understatements of all time, BMW proclaimed in a news release sent to TorqueNews, "the Gran Coupe is 4.4 inches (111 mm) longer than its 2-door coupe sibling. A significant part of this extra length has been used to enhance seating comfort for the rear passengers." Let's face it. There was no seating comfort for rear passengers. Possibly, two people 5'4" tall could sit back to back but even children found it uncomfortable to be stuck in the rear seat.

The 2013 BMW 640i Gran Coupe has a 4.5-inch longer wheelbase than its two-door counterpart, all of which has to be in the rear passenger compartment. The front-seat passengers never lacked for space in the coupe. The four-door coupe also gets a real trunk measured at 16.4 cubic feet.

The innovations in the new BMW 6 Series Gran Coupe also extend to lighting technology, in the shape of optional Adaptive LED Headlights. Innovative for BMW but a staple of the new Audi lineup just in case one had any doubts that the Bavarian automaker was playing catchup.