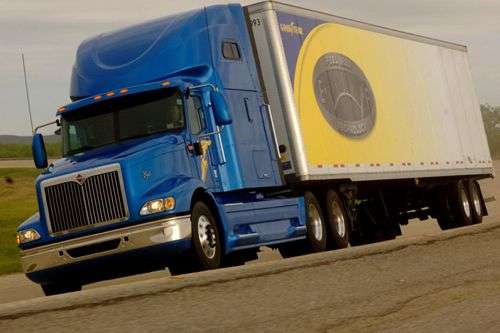 Where would the automotive industry and practically every other industry in the United States be without truck drivers? Well, there are some people who owe their lives to these astonishing truck drivers who have been named finalists for Goodyear’s 29th North America Highway Hero Award.
Advertisement

Founded by Goodyear in 1983, the Highway Hero Award honors professional truck drivers and the often unnoticed life-saving rescues and roadside assistance they provide as they travel the highways of North America. For more information, go to the award website.

"The Highway Hero Award recognizes professional truck drivers who put their lives on the line to help others," said Phillip Kane, vice president, Goodyear Commercial Tire Systems. "Each of our Highway Hero finalists rescued strangers who were in life-threatening peril, and each is a worthy candidate for the award."

Finalists include a Minnesota driver who came to the aid of an elderly couple that had been trapped in a car during a raging snowstorm; an Ontario driver who pulled a motorist from a car minutes before it exploded; an Ohio driver who rescued a trapped motorist whose car had plunged into a pond; and another Ohio truck driver who positioned himself between a woman and a gun-wielding attacker.

The finalists for the 29th Goodyear North America Highway Hero Award include:

• John Crozman of Albertville, Minn., who drives for Long Haul Trucking. While driving down a rest stop access road near Summit, S.D., in the middle of a severe snowstorm, Crozman noticed a candle flickering inside a car that was parked on the side of the highway. Fighting sub-zero winds, Crozman walked to the car and found an elderly couple inside. Ill-equipped for the dangerous weather, they had been trapped in the car for more than four hours. Crozman led the shivering man and woman to his truck and let them spend the night in his warm sleeper cab. The next day, he made sure they were safe and their car was rescued before continuing along his route. Authorities noted that the severely low temperatures could have been deadly to the couple if not for Crozman's actions.

• Melville Farnell of Shelburne, Ontario, a driver for Tupling Farms Produce Inc. Farnell was making a delivery on May 13, 2011, when a car that was traveling in the opposite direction veered into the path of his truck and slammed into it head-on. The impact caused Farnell's tractor-trailer to jack knife. Diesel fuel began leaking onto the highway. Though shaken, Farnell approached the car, which had come to a stop in a ditch, and observed a semi-conscious male in the driver's seat. Farnell, who weights 165 lbs., broke the driver's side window and pulled the much heavier motorist to safety. Minutes later, the car exploded. Farnell was credited with saving the motorist's life by acting swiftly and putting his own life in danger just before the explosion.

• John Neumeier of Russia, Ohio, who drives for Bohman Trucking. Neumeier was loading his milk delivery truck around 9 p.m. on Nov. 14, 2011, when a car driving down a nearby road missed a curve and plunged into an eight-foot-deep pond. As the car began to sink, Neumeier looked to see if anyone was inside and he could see the driver's cell phone light. Knowing he had little time to waste, he grabbed a large wrench, dove into the pond, and beat on the driver's side window until it broke. Neumeier pulled the driver, a 65-year-old man, out by his feet and hauled him to shore. The man was taken away by ambulance.

• Mike Schiotis of Seville, Ohio, a driver for Panther Expedited Services Inc. On Nov. 1, 2011, Schiotis was driving to his destination in Pennsylvania when he saw a woman walking with a man close behind her. Thinking they were injured, he slowed down and observed that the man was pointing a gun at the woman. Schiotis stopped his truck and the woman began pounding on his door, screaming, "Help me! He's going to kill me!" Schiotis jumped out of his truck and positioned himself between the woman, who was bleeding from the head, and her assailant. He helped the woman into his rig and decided to take her to the next truck stop. The gun-carrying man got back in his car and began to follow Schiotis' truck, which continued along the interstate instead of stopping. Schiotis notified the Pennsylvania State Highway Patrol, then used his CB radio to tell other truckers in the area about what was transpiring. Another driver, who was behind Schiotis' 18-wheeler, heard him and decided to help. Together, they drove side-by-side, weaving back and forth to prevent the gunman from closing in on Schiotis' tractor. This gave troopers time to catch up with the man and apprehend him.

Trucking industry journalists are now voting on this year's Highway Hero finalists, who will be featured March 22 at the Mid-America Trucking Show in Louisville, Ky., at the Truck Writers of North America annual banquet. The driver who will be named the 2011 Goodyear North America Highway Hero will receive a specially designed ring, a plaque and a cash award. Each of the other finalists will receive a plaque and a cash award.

Aaron Turpen wrote on February 18, 2012 - 5:10pm Permalink
Awesome stories. I'm glad it's someone else's job to vote, I wouldn't know which one to pick.