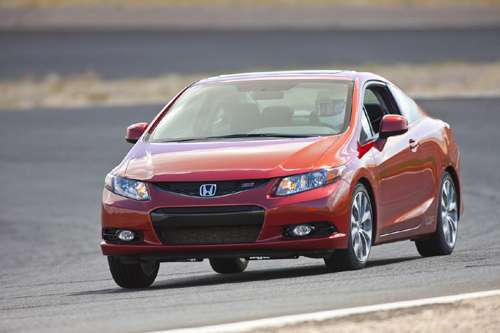 Consumer Reports is out with fairly light praise of the 2012 Honda Civic Si coupe that, in the words of the popular consumer testing publication, is a good powertrain in search of a decent car to surround it. The car has been named to the magazine's recommended list.
Advertisement

The 2012 Honda Civic has been fairly getting beat up in the automotive press. As Consumer Reports points out in a press release made available to TorqueNews, "While the Si performed better than more basic versions of the Civic, the car still suffers from many of the same drawbacks as other Civics: vague steering, cheap plastics, a jittery ride, and lots of noise. "

As Consumer Reports relates, the Si has better performance than the other Civics with its 201-horsepower, 2.4-liter i-VTEC engine, matched with a close-ratio 6-speed manual transmission. But, and isn't there always a but, it still features many of the same problems of its siblings: "vague steering, cheap plastics and a jittery ride," as Consumer Reports sees things. "The Civic Si has a great powertrain, but it needs a better car wrapped around it," said David Champion, senior director of Consumer Reports Automotive Test Center in Connecticut.

The vague steering is an important issue because the 2012 Honda Civic Si has motion-adaptive electric power steering. Companies are using electric power steering for its lower weight that improves fuel efficiency. However, when it's not done right, the results can be off-putting. When you buy a car like the Honda Civic you do so because you don't want problems. Lousy steering input bangs you over the head every time you drive the car.

Consumer Reports found the Civic Si 201-hp, 2.4-liter four-cylinder engine delivers "terrific acceleration at high revs." Compared with the frenetic previous Civic Si, the now larger engine has more torque and is more relaxed in everyday driving. The Si returns a very good 29 mpg overall. A six-speed manual is the only transmission offered on the Si.

Those revolutions aren't as high as they used to be. Honda has managed to drop an engine in the Civic Si that delivers peak power at a more accessible 7000 rpm compared to the previous Si engine's 7800 rpm power peak. The torque for the engine also is more accessible at lower rpms. The new 170 lb-ft rating occurs at just 4400 rpm, 1700 rpm lower than the previous engine's 139 lb-ft at 6100 rpm.

The full report on Consumer Reports' tests of the Civic Si is available on www.ConsumerReports.org and in the February issue of the magazine—on newsstands January 3. Consumer Reports is the world's largest independent product-testing organization. Using its more than 50 labs, auto test center, and survey research center, the nonprofit annually rates thousands of products and services. Founded in 1936, Consumer Reports has over 8 million subscribers to its magazine, website and other publications.