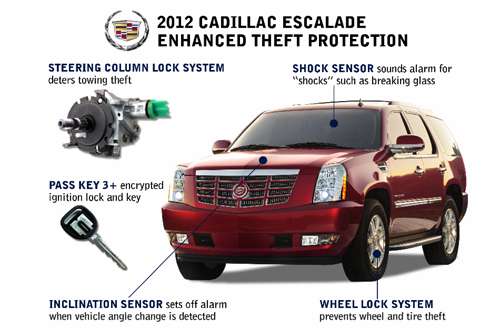 Just before the busiest car theft day of the year, Cadillac has announced stronger security protection for the 2012 Cadillac Escalade luxury SUV that sits on the list of most stolen vehicles. It's a good timing for the announcement in advance of the busiest day of the year for car thieves.
Advertisement

As TorqueNews reported recently, New Year's Day is the most popular day for car thefts. Vehicles, like a 2012 Cadillac Escalade, are just sitting there as prime targets because thieves know revelers will be tied up until at least 12:30 a.m. So, they strike on New Year's Eve and the cars get reported stolen on New Year's Day.

GM has upped the fight to protect the Escalade by making it harder to push it or tow it away to a new illicit home. As Cadillac said in making the announcement, " The Escalade is already well-protected against typical drive-away grand theft auto through existing security features and standard OnStar security technology."

The 2012 security enhancements:
* PASS Key 3+, a sophisticated encryption system for the key, key cylinder and ignition system (Deters: Drive-away thefts)
* A more-robust steering column-lock system that makes it nearly impossible to maneuver the Escalade onto a flatbed. (Deters: “push-away” thefts)
* An available inclination sensor that sets off an alarm when the system senses an unwarranted change of the angle of the vehicle, such as would occur with towing, flat-bedding or lifting the vehicle. (Deters: towing, push-away, and wheel thefts)
* An available shock sensor intended to reduce content theft and push-away theft by sounding the alarm when the vehicle is “shocked,” such as by breaking window glass. (Deters: Property theft)
* An available new wheel lock system to help prevent the theft of Escalade’s wheels and tires.

Hidden in the announcement of the new enhancements is the word "available" for the inclination and shock sensors, which would be the most key to preventing the Escalade from being moved against the owner's will. The new wheel lock system is also optional and seems to be a good investment considering the cash some Escalade owners put down for their wheels. Cadillac PR officials did not return an email seeking pricing information on the new features.

These new security enhancements seem to work well with the existing OnStar system. OnStar provides standard additional security with a remote ignition lock that can prevent the vehicle from starting if a break-in is detected. If a vehicle is stolen, OnStar can also provide vehicle location and remotely slow the vehicle down to assist law enforcement in vehicle recovery.

“These types of innovative theft prevention technologies are a significant step in helping to reduce vehicle thefts,” said Joe Wehrle, president and CEO of the National Insurance Crime Bureau. The NICB, which tracks the busiest holidays for car thefts, also compiles the list of most stolen cars. It's own website, interestingly, does not list the Cadillac Escalade among the most stolen cars in 2010, the most recent year for stats.

It's the Highway Loss Data Institute that pegs the Escalade as the most stolen vehicle but by a different metric than sheer volume. For every 1,000 insured Cadillac Escalades, during the 2007 through 2009 model years, an average of 10.8 were reported stolen, said the study group, which is an affiliate of the Insurance Institute for Highway Safety.

Also, the real test comes in a few years to see how dependable the new systems are. Previous generation motion sensor gremlins have led to instances of owners not being able to drive their vehicles because of the sense it was not level and was being towed against its will.