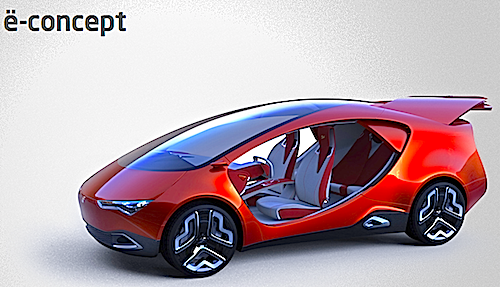 You’ve never heard about the ë-mobile from Yo-Mobil? Then read on to see if and when this interesting Russian hybrid will hit the road.
Advertisement

We’ll forgive you if your knowledge of Russian hybrids is a little crusty since there are after all none. But if you’ve been covering alternative car energy the much talked about ë-mobile that comes from Yo-mobile or Yo-mobil, depending on how you spell and pronounce it, you’ll be glad to hear it’s still going into production. The hybrid production has been delayed to 2015 but the hybrid has gained in aesthetics.

The Yo-mobil - ë-mobile. To give you a little background, the first ë-mobile story that appeared was over a year ago. The idea seemed interesting but since then, nothing. It felt vaguely as if oligarch money was being tossed around more for financial purposes than actually delivering a hybrid. The ë-mobile should set you off by about $10,000 and according to its website. ë-AUTO says that the price will be officially announced at the unveiling. Performance wise, the ë-mobile's target range should be 249 miles with a top speed of 81 mph. There is talk of a methane option for the ë-mobile.

According to Andrey Biryukov, chairman of ë-AUTO through RT the testing of the electrical transmission is finished. Since the company has various models it is considering offering, it is now looking into which models will be released first. So far, the presumed models are thought to be a coupe, a hatchback, a minivan, and a four-wheel-drive variant named ë-crossover.

What’s In A Name. The company name and product have been cause for confusion. Both product and company name are sometimes reported as Yo-Auto, or other variant but is because the Russian letter ë is pronounced "yo". To add to the confusion, the "yo" spelling is used for the company's web address.

Designs & Aesthetics. If the first prototypes were catchy, this version will certainly turn attention to it. Describing it’s long surfboard effect from profile view, the ë-mobile certainly feels more like a Bertone or Pinin Farina. See the video below for more information.

It’s good to see the Russian automobile market digging into hybrid technology, since we never hear anything much about electric cars there. So far the reality of the ë-mobile making it into production seem good.