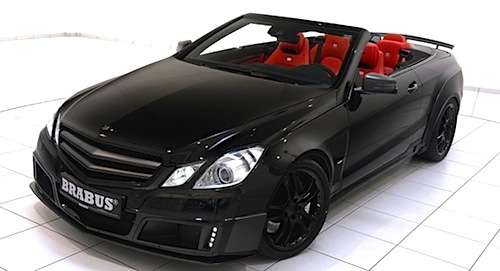 If you want the ultimate fighting machine that doesn’t stand out at every red light begging for competition but can still take on anything, than the BRABUS 800 E V12 Biturbo are the cars for you.
Advertisement

Brabus has been around for a while giving us fine tuned Mercedes. It was founded in 1977 as a high-performance aftermarket tuner company specializing in Mercedes and has evolved into completely reengineering motors ranging from the entry-level 200 hp K4 for the SLK roadsters and CLK, and quickly climbs all the way up to the 730 hp twin-turbo blocks for the CL-Class, CLS-Class, G-Class and S-Class. You can either send Brabus your current Mercedes or have them buy one directly form the manufacturer. Brabus will then tune it with no expense spared. And if you need to ask how much its top of the line costs, then chances are this is not for you.

This top of the line Brabus 800 V12 Biturbo iteration is the Uber sleeper. While the sedan and coupe versions have been around for a little while, it is now also available as a convertible in case your hairdryer doesn’t work. The BRABUS 800 E V12 Cabriolet is hailed as the world’s most powerful and fastest four-seater convertible according to the company. While you won’t attract a lot of common eyeballs with either version, only discerning aficionados will recognize the Brabus sorcery on these Mercedes. You’ll still be able to insignificant munchkin riders or simply cruise along unnoticed, the choice is yours.

Technically Speaking. This is the ultimate Brabus with 788 hp on tap, fed by twin-turbo gorging the V12 under the hood. The convertible version will mean you can up the coupe and sedan by 1 extra horsepower, bringing it to 789 hp. The company does a superb job reengineering the original V12 in almost all aspects. By using a Mercedes-Benz C 63 AMG Coupe as its base, Brabus removes the original 6.3 V8 and replaces it with a highly tuned V12 based on the three-valve engine of the current Mercedes S 600, then slaps on two 4 water-to-air intercoolers on the turbos to make it sprint the 0 to 60 in 3.7 seconds, 0 to 125 in 9.8 seconds, and reach 186 mph in 23.8 seconds. Its top speed is slightly over 230 mph. Those are impressive numbers the convertible keeps up with the 0 to 60, but adds a .1 fraction of second for the rest. A special crankshaft is built with longer stroke and larger pistons, as well as boring out the cylinders to bump its displacement from its original 5.5 L to 6.3 L, or 336 to 384 cu. in.. By optimizing the mixture flow further along with sports camshafts, modifications to the engine give it this incredible performance. The company tooled a special stainless-steel high-performance exhaust system that branches out into an elegant four tailpipes specifically designed for it. The details drill down to a completely newly developed intake manifold that is integrated under the carbon-fiber ram-air hood scoop below the custom-built hood.
The Brabus engine delivers 1,047 lb-ft of torque and in order for the drivetrain to endure such stress and last, the torque is electronically limited to 811 lb-ft as soon as it reaches above 2100 rpm. What this means is a smooth, long, flat, torquy curb that keeps on giving. The company notes that the performance varies depending on which options you chose.

As far as gearing and shifting, the Brabus sports a much needed reinforced seven-speed gearbox that can be used automatically or manually, as needed through shift paddles. With a BRABUS limited-slip rear differential with a locking rate of 40%, the car sports the usual dynamic systems driving enhancements, ABS, ASR and ESP.

Aesthetics Meets Stability. Matching aesthetics to performance with a pleasing design is always a tricky venture, something Brabus achieves here. The body of the original Mercedes has been widened to fit ultra-wide 9.5Jx19 wheels mounted on 265/30 ZR 19 tires for the front. The rear receives carbon-fiber fender flares allowing tires up to 295/30 ZR 19.

OK, since you are asking how much, we will tell you, but first sit down. How does roughly $500,000 sound for a well reengineered supped Mercedes? And as for the question is it a Mercedes or a Brabus? The Brabus 800 E V12 Biturbo might have started their respective lives as Mercedes, they are an entire different beasts.