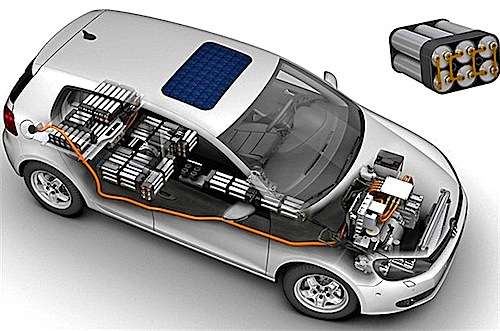 VW has certainly given ambiguous messages when it came to the electric car. The electric car was sometime sought of as “demonstration only” or derided elsewhere. Yet an initiative by the German government that aims for no less than 1 million electric cars on its roads by 2020 might has hasten Volkswagen electric car development. VW is teasing us yet again with another version of its electric version of the Golf. Images of the preproduction version “leaked” and are making their way to the news.

Technically Speaking. According to AutoForum.cz, the Czech car website, pictures of the preproduction latest electric from VW, the e-Golf will be based on the brand new Mk7-generation car. Now imagine removing the engine and replacing it with a 26.5 kWh lithium-ion battery pack that should give you about 108 miles, that is on the European cycle. Nonetheless, if these figures are met, that would place it in the Nissan Leaf driving range with about 70-80 miles can be expected.

Drive Mode. It’s electric so it has drive modes. In our case here, as is often times, there are three driving modes to choose from. From Normal, Eco and Range, each settings can be selected to tap into a specific tweaking. In Normal, as the name implies, everything is left as-is and you let the electric car do what it was designed to do. However in Eco mode, the power is cut down to 95 HP, as well as the reduced top speed. Range really curtails speedy driving, with top speed limited to just 59 mph and disconnects the air conditioning unit.

Luggage space has decreased somewhat due to the placement of the battery pack that now resides under the rear seats. The total loss is about a cubic foot.

Where Can I See It? If you happen to be around Switzerland for one of the greatest car show ever, the 2013 Geneva Motor Show definitely fits the bill. This is a worldwide view of the industry, things we wouldn’t see elsewhere but are the livelihood of this part of the world.

In the meantime, we hope this little electric car, the e-Golf makes down to production.