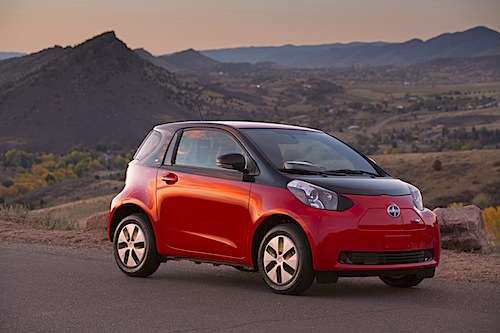 Puzzling Toyota who said it would not go any further with electric car still manages to impress us with an astounding RAV4 EV and now an electric iQ. The 2013 Scion iQ EV is here.
Advertisement

Toyota never ceases to intrigue. The undisputed king of mass produced cars we expect to come with a fair amount of quality built in and high mileage announced a few weeks ago that it felt customers weren’t ready for electric cars. See our: Toyota Scales Back Electric Car Roadmap for more on that topic. Yet, it has shown an electric SUV with its RAV4 EV that seriously impressed us and now is making good on its electric iQ. In the end, we can only welcome more choices in alternative energy cars.

The iQ EV Cometh. Today, Toyota Motor Sales, TMS, U.S.A., Inc. has announced the arrival of the 2013 Scion iQ EV in the United States. The iQ EV is a battery electric four-seater city commuter car designed for car-sharing programs. Toyota is quick to add that it is unveiling the program in urban and campus environments, in case you get your hopes too high.

It seems Toyota is now singing a slightly different tune then it did a few weeks ago. When it comes to electricity, the company officially says it recognizes the potential future use of battery operated electric cars and that’s why they developed the electric iQ. Case in point, Chris Hostetter, TMS group vice president of strategic planning has to say the following: “Toyota believes battery-electric vehicles have the potential to play a role in future mobility strategies. Up to now, cost and convenience issues have limited BEV’s appeal with a broad consumer market. Toyota developed the iQ EV specifically as a city commuter, for use in an urban environment, where driving distances are likely to be short, charging opportunities numerous, and its compact proportions beneficial.”

Technically Speaking. The iQ EV uses Toyota’s newly developed “high-output” lithium-ion battery which boasts a frugal electric power consumption rate of 167.37 Wh per mile. All of this comes in an ultra-compact and lightweight urban car, ideal for stop and go traffic. The 12 kWh battery provides an estimated range of up to 50 miles on a full charge, sufficient for urban cycles and city driving. The electric iQ can be fully charged in approximately three hours at 240V. With its maximum output 47 kW, 63 hp and its maximum torque of 120 lbs ft, in its S mode range, the iQ EV accelerates from zero to 60 mph in 13.4 seconds, and from 30 to 50 mph in seven seconds. Its top speed is 78 mph.

But its strength lies in its 78-inch wheel base and 13.5 foot turning radius that makes it highly maneuverable in congested areas, perfect for narrow streets and parking situations. According to the company’s press release, the electric iQ focuses on the conservation of power consumption using a compact lightweight body, power-saving electrical equipment, and of course, the experience it has gained from its hybrid and plug-in hybrid development.

According to Hostetter: “Approximately 90 iQ EVs will be available for fleet and car-sharing applications. These programs will further expand Toyota’s comprehensive portfolio of advanced technology vehicles which includes the recently-released RAV4 EV, the Prius Family of gas-electric hybrid vehicles, including the Prius Plug-in Hybrid, and the FCHV-Adv (Fuel Cell Hybrid Vehicle-Advanced).”

Yes, But What About Mine? And on this topic, you know the drill. This is a fleet project first that will use important usage data to fine tweak the final mass produced product. It’s not an unusual process and is standard for mass-automobile producers to first gather data from fleet owners before delivering the final products into individual customer’s hands. As to how much? For this, we’ll have to wait until Toyota finishes its test and where the lithium battery price falls tomorrow.

So Toyota, is it a boy or a girl? Toyota is cautious in approaching the pure electric drive and even though it claims the public is not ready for it yet. We see a bright future for small electric cars where they perform best, in city and congested urban areas. Could it be that Toyota received such high praises for its RAV4 EV that the company is now looking more seriously at EVs? The iQ is a given for an electric drivetrain. It’s very compact but can still house our Western bodies comfortably. We look forward driving the electric iQ soon to tell you more about it.