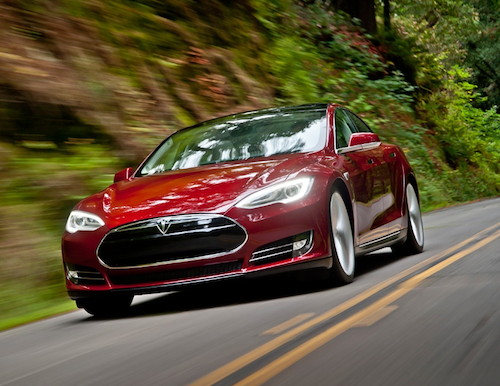 Tesla Motors Nails 0 To 60 In Under 4 Seconds

Much rides on the shoulders of the Tesla Motors Model S, the follow up to the incredible Roadster I drove a few years ago. The numbers so far look promising.
Advertisement

Needless to say, the Model S is the real test for Tesla Motors to see if it will make it the distance. If the Roadster used a Lotus redesigned chassis, according to some to accommodate Elon Musk’s wife, Justine who complained getting out of the sporster was difficult for a woman, the Model S is a full size sedan. Tweaking and re-engineering a chassis is one thing, building one from scratch is another. The Model S is Tesla Motors’ first go at fully designing, building and implementing an electric car.

The Range Problem. Up until a few years ago, the mass majority of car drivers were blissfully unaware of the tricky calculations determining miles per gallon, MPG. The real range you could expect from a full gasoline tank was not necessarily what was advertized. After all, we all drive differently. Some gun it at green lights, others don’t. Add to this atmospheric and weather climate conditions and you have the perfect recipe for a nightmare. Nonetheless, the Government EPA’s rating worked somewhat and appeased drivers.

Electric Cars Have Issues. Yes, you’ve heard it here first, there are issues with electric cars. Come to think of it, any new technology introduced has “issues”. The white elephant in the room with electric car is range. The Model S promises a lot of it, especially considering its size. With anywhere from 160 to 300 miles, the claim is bold but does it hold out? Motor Trend decided to test the Tesla Model S in a real world scenario to see if the claimed driving distance went the... distance.

The Numbers. The 0 to 60 mph was indeed achieved in under 4 seconds, 3.9 exactly. The electric car was silent for the 12.5-second quarter mile it achieved at 110.9 mph. Those numbers pits the Model S Signature Performance 85 with other performance sedans, such as the BMW M5 and the Mercedes CLS 63 AMG among others.

The rest of the test focused on range. A 240 miles Californian I-5 road trip was planned to see if the claimed 265 miles of range was true or not. To be fair, Motor Trend turned off the air conditioner, but ventilation was left on and a cruising speed of 65 mph was set. All in all, the Model S fell short of 1.7 miles of its 240 miles.

But is it surprising? Those who understand the intricacies of range, weather, driving styles, speed and more also understand that the Model S could have even reached 400 miles but at 35 MPH. This test doesn’t negate the electric car’s promise, it highlights the impossibility of claiming accurate range. So far, the Tesla Motors Model S packs a lot of performance, enough to go toe-to-toe with other regular gasoline performance sedans.