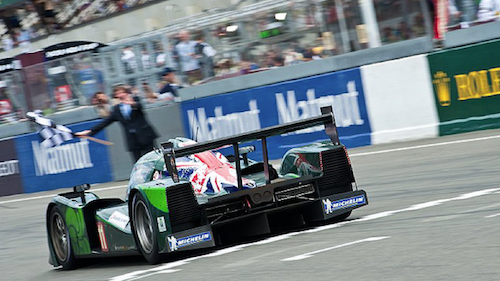 Racing An Electric Lola B12/69 EV Feels Like A Catapult

The successful conversion of a Lola B12 into a B12/69 EV by Drayson Technologies has been hotly anticipated over the years. The fruit of its results is starting to trickle in and so far, the numbers are outstanding.
Advertisement

Racing With Electric Motors. When it comes to racing, electric motors in theory squash any thermal combustion engines. The only problem is carrying its on-board energy. There are two solutions to this problem. Develop smaller and more energy dense electric batteries or recharge while moving.

Drayson Technologies. Drayson Technologies seems to be on the lookout for both. Using the Qualcom Halo’s wireless charging system we covered here, this could allow the electric Lola to recharge while it races or simple fast charge as it pulls in the paddock.

In its first public race outing, the Drayson Racing electric Lola B12/69 EV racer performed beyond expectations, according to the team. Driver and co-owner Paul Drayson said racing it was like being launched in a catapult. The team enjoyed the Goodwood Festival of Speed incredibly and considering they only had one day of testing, the electric racer met all expectations. According to them, the racer turned out to be 100% reliable. Now the team is working on building up the power for longer runs, as well as tweaking the active aerodynamics.

Judging from the following video, we understand what Paul meant by feeling like being catapulted.

Technically Speaking. The electric Drayson Lola B12/69 EV can be configured differently, going all the way up to over 850 HP. The battery pack fits tightly where the gasoline engine normally fits in conventional racers. The battery pack made out of Lithium Nanophosphate battery cells is made by A123 Systems and built by Mavizen. Currently the electric racer can pack up to 700V with 60 kWh, with an on-board recharger configuration that can go up to 100 kW.

Using four axial flux Oxford YASA electric motors with inverters from Rhinehart, each is rated at over 212 hp putting out in this configuration about 850 HP. LMP1 should have a minimum of 1984 lbs, or 900 kg and our electric racer comes in at about 2,204 lbs, or 1000 kg. Even with this extra weight, the car still manages to go head to head with the best internal combustion engine sport prototype racers, a testament to the electric drive.

We will see a lot of development the next few years as electric cars continue to refine battery technology. Promises of lithium air with an average range of 500 miles in 8 years is only the beginning. Racing is where everything will happen, from a push for better and more energy dense batteries to lighter and stronger materials. We look forward to seeing the Drayson Racing team lead the forward with its Lola B12/69 EV.

LG's New EV Battery Plant Is a Welcome News for Tesla
Tesla Giga Berlin's New Hurdle: It's Not Only the Gov't, but Now Tesla Itself
END_OF_DOCUMENT_TOKEN_TO_BE_REPLACED