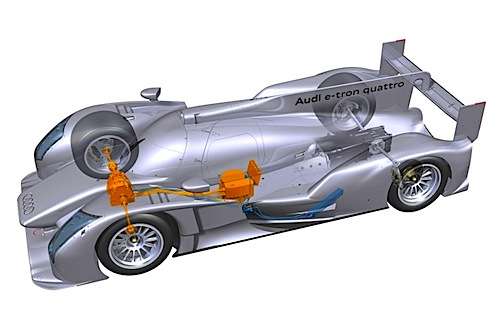 The revised Audi R18 e-tron quattro’s specifications are out and the verdict is in, this years’ competition is going to be red hot.
Advertisement

If you want to see where the future of racing is pointing to, look no further than the bleeding edge technology platform of prototypes. For the past decades a few car makers have been testing the endurance of several hybrid systems at some of the most grueling races, including the ultimate 24 hours of Le Mans. Audi once stunned the racing scene by bringing in a Diesel prototype, which eventually started winning. Since then, Audi has been on a constant offensive with their eyes squarely riveted on the American market.

Hybrids Of Different Natures. Sports prototype is where you will see the latest technologies thoroughly tested, which eventually trickle down to our every day cars. The Germans have done a great job fine tuning diesel over the past decade and the Audi R18 e-tron Quattro pushes the envelope further. It will go against other forms of electric motor hybrids with a flywheel. Although sadly Peugeot decided not to compete this year, another hybrid heavy hitter Toyota will meet the challenge. The battle for the title of the fastest hybrid race machine is raging.

Technically Speaking. The 24 Hours of Le Mans have seen its average speed go from 125 mph to now well north of 210. Audi’s V12, 5.5 liter 700 hp R10 TDi clocked in at 204 mph in the 2006 race. A year later it reached 211 mph. Audi chose the wheel to go head to head with Toyota’s gas electric TS030 Hybrid powered by a non-turbo or compressed version of its 3.4 L V8 helped with a supercapacitor energy storage system developed by Nisshinbo. Taking a cue form the original KERS system used in F1, Audi’s R18 e-tron quattro sports a magnetic loaded composite flywheel, called MLC. This system was originally designed for F1 by Williams Hybrid Power, which Porsche used with much success on their GT3 R hybrid between 2010 and 2011. It has since come a long way.

The system now provides 150 kW of power in the front wheels when the motors spin at full speed, 45,000 rpm. The advantage of a flywheel system compared to other hybrid designs is that it is a high power density with low mass, high efficiency energy transfer system that sports other race must have, such as a long life cycle and wide temperature range.

Audi’s Turn Around. Audi has also warmed up to the electric drive and turned away form its initial disdain. Proudly proclaiming no future in it in 2008, by 2009 it stunned us with the original e-tron prototype at the Los Angeles Auto Show. And today, Audi sees no other future but the electric drivetrain incorporated in cars, one way or another. In fact, the company says the entire industry is facing what Audi's Head of Motorsport Dr. Wolfgang Ullrich calls "the electrification of the drive".

Why is it so important? Audi here is not only testing a hybrid system and seeing its endurance performance, it is also racing two identical TDI Audi R18 ultras without the hybrid platform. We will see right down to seconds the advantage a four wheel drive coupled to a magnetic flywheel can give a racer over the course of an entire day.

Audi has much riding on its shoulder with the slow introduction of the e-tron series. As far as racing, it won 10 out of the last 12 races at Le Mans, conceding the 2003 victory to Bentley that stayed in then family. This is a particularly amazing record considering the 24 hour race of Le Mans is grueling and extremely unforgiving. How many cars have we seen lead at twilight only to witness their demise from the slightest problem.

Sport Prototype Season. For Audi the season starts Spa-Francorchamps in Belgium, May 5, followed with the World Championship in Sebring, USA, March 17, then the Le Mans race in June.

This year will again be a season to watch as Audi tries to pit a kinetic hybrid system against Toyota’s electric hybrid. In the world of racing, the consequences are major for the auto industry and the contribution of the Audi’ R18 e-tron Quattro will trickle down the factory line eventually.