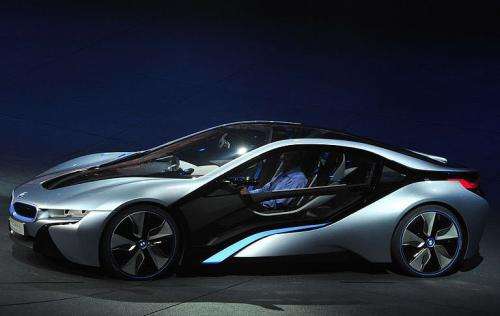 Interview with BMW's Head Designer On This Century's Vision

BMW is synonymous with performance gasoline engines and silver metallic cars. Their next bold bet for the future involves a very bold use of alternative energy and efficient aerodynamics.
Advertisement

You might have this image of BMW’s road hugging M series and engine sounds, but what you might not see just yet is the company’s incredible vision of a more sustainable future through its use of advanced material, alternative energy and stunning aerodynamic bodies.

I’m also guilty as charged but when I think of BMW, I think metallic gray M3 and M5 with their distinctive sound and handling characteristics. One thing we can all agree on is that BMW and low fuel consumption is not commonly associated. What might not yet fully obvious is the company’s tremendous bet to challenge itself and carve out a piece of a more sustainable future that still involves performance. While they might not know exactly what that future looks like, if the i8 and i3 concept, respectively the breathtaking plug-in hybrid, PHEV and the all-electric car, EV are anything to judge by then the company is poised the performance electric cars and plug-in hybrids winner of the next new decades.

BMW’s Role For The Future. After talking with Benoit Jacob, Group Design at BMW and Oliver Walter, Head of Production Management, a hidden aspect of the Bavarian company slowly revealed itself to me. It is a radical shift away from the more clinical-like performance of its internal combustion engine, ICE division to one of real tangible alternative energy performance.

Give them credit, how many ICE kings suddenly use their design and engineering might to carve out a truly passionate car that is fuel frugal and packs a lot of performance? Innovative styling, efficient dynamics, using modern material technology with an alternative energy powertrain, BMW is set to woo you. If we take Porsche’s Unobtanium 918 out of the equation, BMW is probably the only carmaker looking outside its well designed gasoline cars to the world of alternative energy. The BMW i concepts are a radical departure into the future, tearing apart any conventional expectation you might have of the company.

What struck me was the company’s unusual candidness and frankness to say they didn’t know exactly where it is all going but they are having a lot of fun designing cars that marry passion, performance and efficiency.

Design Wise. What hasn’t been said about the i8? Shots after shots of this beautiful body, I find myself feeling the concept looks good from any angles, period. Even the i3 manages to slip in some of the most intriguing and eye-pleasing curves with efficient aerodynamics. Both of these cars are roughly 80% production accurate. Even more impressive, the i8 is very close to the Vision EfficientDynamic concept we saw years ago. My talk with Benoit Jacob who designed both cars was an eye opener. Could BMW claim the title of passionate performance so long held by the Italians? If it continues like that, I don’t see why not.

Curves And Reasons. Every curve, line and feature is functional on both i8 and i3, ranging from the static upper windshield spoiler to the amazing rear line air diffusors of the i8. Benoit reminded me that he wanted static aerodynamics and not rely on automation. In essence the i8 and i3 build on BMW’s performance past but with modern alternative energy drivetrain.

Candid View Inside. On the inside, it’s clear that BMW thought everything through. The i3 chair materials make use cloth in the middle and leather outside for comfort and maintaining you correctly up. Another eco-chick wink is the car makes use of light and clear materials but will slip in a dash of class and luxury with a nice long flowing wood design on both dashboards.

Besides how impressive both cars are, what won me over was the frank and candid talks I had with Benoit and Oliver. This is a side we are not used to with BMW. After all, you sit the way BMW intended it and the car does the rest. While we wait for test drives, I will keep a close eye on this new face refreshing face Benoit Jacob is painting with BMW heralding a passionate future filled with performance using cleaner energy and lightweight tough materials with its i8 and i3.