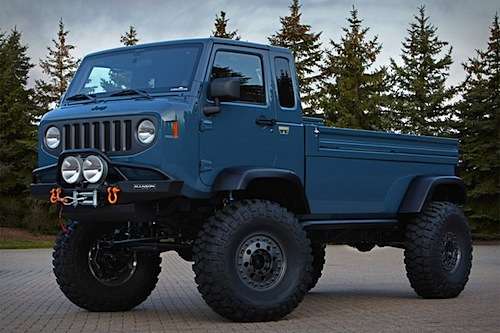 How Chrysler And FIAT Are Reviving Jeep

When FIAT came to revive ailing Chrysler, it was puzzling to see how the Italian would fare where the Germans had failed, especially in the Jeep market.
Advertisement

FIAT and Chrysler couldn’t be anymore different cultures working together to come out of this global economic quagmire. The unlikely partners have put their heads together and under the guidance of Sergio Marchione’s Canadian academic background, are showing signs of vitality. Marchione’s background makes him a perfect candidate with an MBA in 1985 from the University of Windsor and a Bachelor of Laws, LLB from Osgoode Hall Law School of York University in 1983, giving him one foot on this continent and the other in Europe.

The Chrysler Dilemma. Bringing back Chrysler form the verge of extinction hasn’t been an easy task but it looks as if the FIAT group has done a good job so far. After all, he is responsible for turning around the chronically ill Fiat Group that used to bleed away it intellectual properties in order to stay alive. It is now again one of the biggest car companies, returning to profitability in 2006 after Marchione was than two years at the helm. In 2009, he negotiates the Fiat Group & Chrysler alliance and less than two years later, it returned to profitability repaying all government loans by May 2011. But what can a European do about an SUV company such as Jeep?

Bringing Back Jeep Up To Speed. So far, Jeep has reaped the fruits of its labor and has found success once again amongst its most loyal clientele. And to celebrate this, the group is once again returning to the 2012 annual Easter Jeep Safari in Moab, Utah with six new Jeep® and Mopar vehicles ready for a week of desert wheeling in the Moab desert. The 46th Easter Jeep Safari is taking place till April 8 giving the opportunity to thousands of die-hard off-road enthusiasts to ride some of the country's most renowned and challenging trails. Mopar announced the creation of an off-road division that will create Jeep Authentic Parts and Accessories.

2012 Jeep Wrangler Apache from Mopar. The new Jeep Wrangler Apache has received the much anticipated V-8 powered engine with a Mopar version coming soon. The Easter Jeep Safari’s new Mopar 6.4-liter HEMI V-8 engine conversion kit will produce around 470 horsepower with 470 lb.-ft. of torque to the rear wheels. It should be enough to satisfy most die-hards.

Jeep Mighty FC Concept. The interesting new come-back kid is the Jeep Forward Control, originally built from 1956 to 1965. This beast keeps its overall length at a minimum for maneuverability, while maintaining a full-length cargo. The modernized version of this classic started with a 2012 Wrangler Rubicon and repositioned the cabin over and ahead of the front axle, lengthening the wheelbase, and adding a custom built drop-side cargo box. The cab uses a Mopar JK-8 conversion kit roof and custom-designed front clip.

Jeep J-12 Concept. Finally, the Jeep J-12 concept is essentially an extended version of Mopar's JK-8 pickup conversion kit for the Jeep Wrangler. With a new 2012 Wrangler Unlimited as the starting point, the rear of the vehicle's frame is extended 18”, allowing the spare tire to be relocated under the bed floor and making the cargo box a full six feet in length. A custom hood and front fender set was created as a nod to aficionados of the beloved Jeep Gladiator series trucks.

All in all, FIAT has not let the SUV enthusiast base down. It concentrated on its highly recognizable Jeep brand and strengthened its offering. There is one glaring question here, when will see a fully electric Jeep? Will it be enough to bring back the rest of the Chrysler group? Time will tell but with about 5 new Jeeps, Chrysler and FIAT can finally ramp up production and rekindles with its historical past.