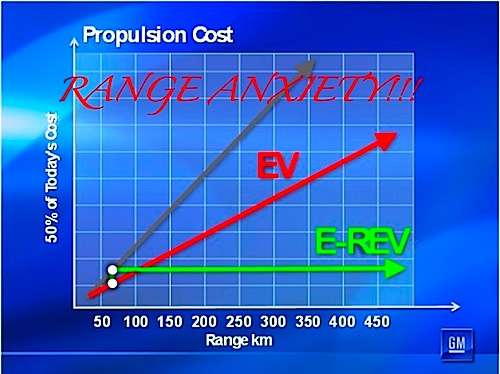 Range anxiety was all the range back when people knew little about electric cars and even less about their true needs when it came to daily miles routine. Did “range anxiety” help or inhibit the electricdrive?
Advertisement

It’s no secret I cringe whenever I hear the term “range anxiety”. It’s negative, it doesn’t help much and certainly doesn’t further our quest toward more choice with alternative energy cars. GM coined the term and has used it ad nauseam over the past years. Many have blamed the venerable old carmaker for putting a negative spin on what essentially boils down to more choice while others swallowed the fear stunt hook and sink. A few years later, leaves us wondering if GM’s “range anxiety” campaign has helped push the industry or slowed adoption of electric cars and plug-in hybrids.

Volt Owners Have Gasoline Anxiety. In the end, range anxiety has turned into gasoline anxiety for many Volt drivers. It seems the PR marketing campaigned designed to instill fear into potential electric car buyers and lure them to plug-in hybrids, has backfired. According to the EVproject from Ecotality, an electric car charging provider whose study with electric cars have found people tend to charge at home most of the time and understand well that a single nightly charge provides more than enough of their daily driving range.

The data gathered by Ecotality, through its EVProject basically tracked the charging habits of about 6,000 plug-in car drivers in the U.S. What it found was a certain phobia amongst Volt drivers who plugged in more often than their all-electric car counterparts. Moreover, Volt owners are 11% more likely to charge away from home than Leaf owners in order to squeeze as much electricity from the car’s pack as possible.

Where GM Got It Right. It’s easy to bash GM and it has become a sport for many, yours truly included but GM has hit high notes in many ways. GM wanted the Volt to be primarily driven as an electric car, meaning using only the battery and its averaged 35 miles of range, without relying on the gasoline engine. In this respect, GM was spot on, Volt drivers like the economics of driving on electricity alone. And who could blame them with gasoline price steadily increasing, something we can imagine only furthering the trend.

Where GM Got It Wrong. GM could have capitalized on its Voltec platform better. Instead it chose to call it an extended range electric car, EREV instead of a good plug-in hybrid. EREV has stretched the definition of a hybrid. GM sold short its technical prowess by inventing a term that would make it sound as if the Volt was indeed a pure electric car. The definition of a hybrid is a vehicle with two sources of energy, batteries and gasoline engine being fitting that definition. So what was wrong with calling the Volt a great series and sometimes parallel plug-in hybrid, PHEV especially when you were first on the mass-market? With the EREV stretch came the scare PR tactic of instilling fear in the mind of would be pure electric drivers, the dreaded and too often used “range anxiety” notion.

What About GM’s Real Electric Cars? A while back I wrote about GM’s new dilemma. See: The Heavy Spark EV Bet For GM. If the Volt is not a plug-in hybrid but an electric car with a range extender, that what should their electric Spark be called? More electric than an electric car? The dilemma is interesting and we will see how GM manages to present us this pure electric car.

While many of us take cheap shots at GM, sometimes deserved, sometimes not, the company decidedly serves these opportunities on a silver platter. It’s too bad when you consider GM has some of the finest and best automotive engineers. Sadly enough, its management shows a certain lack of basic reality checks and lives in a Steve Jobs “reality distortion field” world without the Jobs’ genius.

So what was wrong with calling the Volt the best PHEV currently on the market, albeit the only one? It wasn’t enough for a GM that was facing the biggest humiliation of its history, a close brush with bankruptcy. It had to repaint a new image and wisely used a great plug-in hybrid car it unfortunately marketed it in the strange way. In the meantime, customer have the last word, and the word is that many Volt drivers avoid the gasoline pump and charge more often than EVs in order to extend their electric drive, not the other way around.

LG's New EV Battery Plant Is a Welcome News for Tesla
Tesla Giga Berlin's New Hurdle: It's Not Only the Gov't, but Now Tesla Itself
END_OF_DOCUMENT_TOKEN_TO_BE_REPLACED