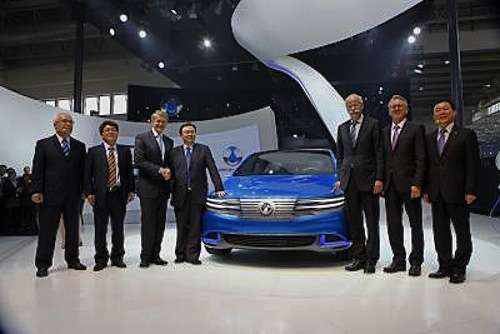 The Future Of Electric Cars Points At The Beijing Auto Show

Is the Beijing Auto Show the event to watch out for electric cars from now? It seems to be heading that direction.
Advertisement

Ferrari, BMW, VW, Daimler, BYD, GM, Chery, and many more and leading by example in China that electric cars, EV are the way to go forward. OK, to be fair, Ferrari’s solution is really a hybrid but if the almighty Ferrari strays from the internal gas combustion system it perfected, this spells in capital letters where the industry is going, from entry-level to full blown exotic high-performance, the electric drive is the way to go.

GM & Chery. Chery wants to optimize GM’s infrastructure idea with an interesting concept called the Ant. Chery’s EN-V concept revisits the idea of mini-EVs that band together to form a chain and much as in a traditional train system, hook up one after the other to travel greater distances. Think of it as a system where you can drive your EV to a space and join a train chain. Given its insistence over the decades, this system is bound to become a reality at some point.

Daimler & BYD. It’s no secret BYD is eyeing the American automotive market and has already a dealership in one or two cities in the US. However, without significant reputation, it would be an uphill market, despite their interesting all-electric 190 mile range e6 and plug-in hybrid, PHEV F3DM. Another strong contender in the EV market is Daimler who now has a solid experience with its Tesla Motors venture and its battery pack for the electric Smart car. What do you get when you cross Daimler with BYD? You get Denza, the joint venture between both auto companies officially launched this year says its first concept is due to go into production by 2013. How serious is it? The first prototypes are already being tested on the roads in China. Its highlights are a battery pack kept well out of the way of passengers and rear-hinged rear doors with back seats that recline. The car aims for high ergonomics.

VW’s e-Bugster. If the Beetle was electric, it would be an E-Bugster… erh, it will be an E-Bugster. This time the E-Bugster goes topless to China and has apparently smitten the local crowd. Technically speaking, the E-Bugster sports good numbers, 115 HP, a 0 to 60 in 10.9 seconds, with a range of at least 110 miles from the 28.3 kWh lithium-ion batteries. A fast-charging feature allows complete recharge at 35 minutes with a fast charging DC source, although a 220V domestic outlet is still an option.

The Importance Of The Chinese Market. The obvious importance of the Chinese new budding automobile market is hard to understate. Millions of consumers with eager wallets are waiting in line to buy cars and get some of that Western world convenience and having made it feeling. However, the allure of electric cars is strong in China, a country already burdened by decades of unrestricted growth that is only starting to show serious negative effects. Acid rain, smog, pollution of all types are of great concern for the Chinese government that aims to curb down its earlier enthusiasm and bring back pollution to sustainable levels. One way of doing this is to push for more electric cars and plug-in hybrids, PHEV especially in this country since its market is mostly in urban areas. While the original market predictions have been scaled back a bit, many experts seem to agree on a more robust adoption these coming years.

Western Cars Meets East. Strangely enough, western automobile companies are sending mixed messages when it comes to China. While there is a serious push toward hybridization and full-battery operated vehicles in this untapped market, most US automakers have intriguing and bold EV and PHEV concepts. At the same time, the old adage: ”Sell more cars in China” is prevalent without much talk of lowering engine emissions. What about the EcoBoosts and the ECoTecs? Obviously, cleaner technologies come in at a premium and introducing it to a new car market is a difficult task.

In the meantime, the Chinese market is a great testing ground for not only electric cars, but also hybrids and plug-in hybrids. The Chinese government realizes how its pollution problem could spiral in an uncontrollably dangerous way. It is acting fast and judging by this year’s Beijing Auto Show and its strong push for electric cars, this might be the event to watch for EVs in general.