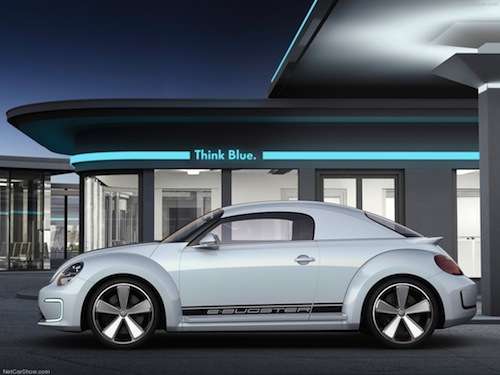 Electric Bugster VW Tries To Catch Up With BMW

It’s probably fair to day that VW, despite its quality reputation hasn’t been the “greenest” car manufacturer in the world and has been more than timid embracing the electric drive.
Advertisement

Some Companies Surprise Us, Other Not So Much. VW has been slow to adopt some sort of electric drive in its lineup. Preferring to tweak its internal combustion engine with better diesels, the company sorely lags behind its local German competitors. While BMW has taken a serious lead in the luxury and performance green vehicle segment, VW is trying to say: “Hey, we’re still in the game”, but all of this is being watched from BMW’s rear-view mirrors.

VW, Where Are You? Although there has been a lot of talk around electric cars with the company, mostly negative, VW spends more time deriding the electric concept than working on it. With its electric Golf and its 26.5 kilowatt-hours of Sanyo batteries being tested in California since 2010, it’s obvious the fleet of 20 is more a compliance vehicle for California than anything else. Stated for production in 2014, they would actually make for great electric cars, EVs but the company’s heart doesn’t seem to be in it. There the hybrid version of the Jetta being tested which is so mild, the Toyota Prius seems like a rocket ship.

The e-Bugster Again. Here comes the e-Bugster, at last and again right on the tail of BMW’s effective PR muscle machine hailing its electric i3 and plug-in hybrid, PHEV i8. See; BMW Invests In Coulomb Technologies And Offers Online i8 Price http://www.torquenews.com/1079/bmw-invests-coulomb-technologies-and-offers-online-i8-price The only testing done to it was on a closed track and doing no more than 20mph. Hum, methinks that is not testing. Surely VW has faster cars than that.

Technically Speaking. With its impressive 28.3 kWh lithium battery pack , its 85 kW electric motor produces 114hp which gives it a range of 110 miles. The 0 to 60 won’t mess your hairdo, it’s a comfortable and uninspiring 10 seconds. So why the lackluster performance?

It seems VW is dragging its feet to the game. And rightfully so, the company has spent more on tweaking its internal combustion engine technology and pouring billions in the eventual future of the hydrogen fuel cell concept than working with electric drivetrains and battery packs. But all of this still begs to question, where is VW going and what will it offer tomorrow? Sure the Audi JTD is a great car and the company is still working on some sort of electrification of its Audi e-tron line, but the developments have been slow and so far, more talk than action.

As usual, smaller, more nimble companies by-pass more traditional established ones. But as we start to witness traditional car manufacturers smartly tackle the electrification of its cars, such as Far and BMW, it makes you wonder why such a global giant as Volkswagen doesn’t embrace electric cars more wholeheartedly.