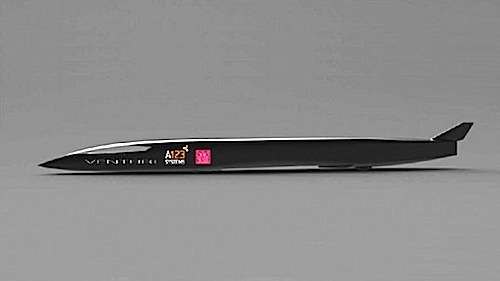 What a different world it is when electric vehicles tackle speed record, hill-climbs and racing. The Buckeye Bullet is back for another world speed record.
Advertisement

Land speed records have always used some sort of alternative energy propulsion systems, mostly petroleum derived and rocket power. One thing they are rarely associated with is electricity. A Ohio State University at the Center for Automotive Research, CAR team decided to answer the challenge to design a fuel-cell-powered car.

Previous Records Broken. Of course, there have been plenty of electric cars that challenged quaint notions that a gasoline engine is the best way to go fast. In the dragster world, the White Zombie Datsun has shocked a soul or two. The equally impressive KillaCycle has also rocked that world. There are also great YouTube videos showing Chrysler’s ENVI team smoking a Viper with their Lotus electric conversion. Those things have been proven but speed records are quite another thing.

Last year, the streamlined Buckeye Bullet shattered the world speed record for an electric vehicle by reaching 291 MPH. And this year, they are back for more, much more with the aim to reach 400 MPH. So how?

Technically Speaking. The Buckeye Bullet 3 is currently being built with greater specs in mind. The grounds up entirely new platform has an increased and optimized aerodynamic shape. It also uses two custom-made electric motors by Venturi. You might not have heard of Venturi but this is the Tesla Motors equivalent on the French Riviera in Monte Carlo. The Venturi Volage is similar performance wise to the Tesla Roadster but sports Michelin’s ActiveWheel concepts, in-hub electric motors and suspensions. As far as batteries, you might be intrigued to find that the team has settled on a set of prismatic A123 Systems batteries. Why? After all, the KillaCycle has used the same batteries for years without any problems. It proves to show companies with great products don’t always fair well, despite their quality. See the VHS versus Betamax fiasco of the 1980s.

All of this also means super computing power and the University’s Supercomputer Center has been called to task their next generation of electric land speed racer that manages to reduce drag by 5% with a series of aerodynamic simulations. One interesting tidbit is that contrary to other high-speed vehicles, the Buckeye Bullet places the driver in front of the tires, which improves the vehicle’s overall dynamics. In order to produce shock waves under the vehicle, the aerodynamic team is devising s series of wind deflectors that will be installed underneath the vehicle.