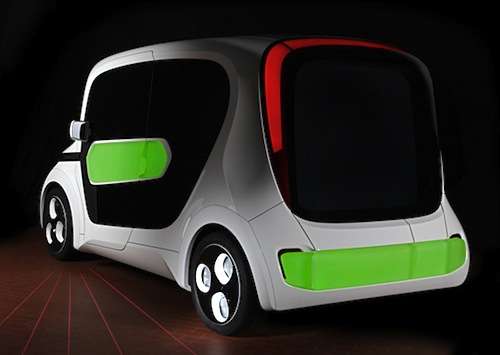 EDAG Takes The Sting From The Gas Pump Blues

EDAG’s Light Car was just an open source concept in 2009, it is now taking shape and could become a valuable key player as an inner city shared electric car.
Advertisement

You might not have heard about the EDAG’s Light Car concept yet but this little electric vehicle, EV could answer many of your questions. With higher gas prices looming in on the horizon, EVs are becoming more and more an intelligent alternative for city drivers. What EDAG has up its sleeves could very well make it a key player in a growing crowd of intelligent electric cars.

Understanding The Importance Of EDAG Concept. Sharing car systems, such a Zip Car have been the holy grail of traffic congestions, higher gas price and limited urban space. EDAG now has a third member to its family of electric cars that tries to answer all of the above mentioned problems. Its latest, the EDAG Light Car – Sharing (can we call it EDAG LC-S?) is designed to be shared with up to six people for use in inner city drive. It stands to reason this EV would excel with fleet owners whose route are predetermined and range is limited to around 40 to 50 miles in general. Can you hear them Zip Car?

Technically Speaking. Now we won’t talk about raw power here, but instead about what makes this car special. In this case, while the original concepts used OLEDs there is an ample use of integrated gel pack LEDs here to makes this car unique. The LED display whether a car is available or not, much as a taxi’s light signals the same. If newbie’s in NY have a hard time figuring out when a Taxi is available or not, this system should be silly proof. Red means the car is in use, green means… you guess it, available. Can you guess what yellow means? The EDAG is recharging. Using a car will require the ubiquitous smartphone that will communicate with central servers and start the current rental procedure. The car will unlock its doors with a specific Bluetooth key.

Did we mention the car was intended to be driven without the use of a Ph.D.? Simplicity is the key here as you will only find accelerator and brake pedals coupled to steering wheel with indicators. A single display indicates your speed, battery gauge state and other navigation information, that’s it. This car is meant to be driven by anyone, at any time, with the least of a learning curve. The car highlights safety with the multiple roles its LEDs play in it. Mirrors make use of lasers that beam out a safety distance around the car, allowing driver and passengers to safely enter and exit the car.

The car stands tall on its wheel, all 6.2 ft. Its shock absorber system differs from traditional cars as it uses what it calls Technogel packs that are integrated into its bumper, presumably taking on the dual role of bumper and road shocks. The EDAG aims to make as much use as possible form smart grids, presumably with a V2G system. The V2G will favor “green” energy as much as possible, whenever available. EDAG also should make use of induction charging at its hire stations, leaving the task of plugging in out of the equation. As far as the other burning questions, how fast, how far and more, EDAG hasn’t revealed much yet. What we do know now is that the chassis is a tubular steel base frame and that the steering is obviously electric.

According to EDAG’ CEO, Jörg Ohlsen: "We see car sharing vehicles as being predestined to launch electric mobility onto the market as quickly as possible. After all, electric-powered vehicles are already able to manage the zero emissions and the kind of short distances to be expected in the car sharing business in metropolitan areas".

With the French Parisian share bike system already in place a few years now and the latest introduction of electric cars to it, the EDAG LC-S would be a welcome addition to a growing shared EV fleet for busy, congested city driving.

Tesla Giga Berlin's New Hurdle: It's Not Only the Gov't, but Now Tesla Itself
Teslas Are Sold Out Until 2023, But The Timing May Reverse
END_OF_DOCUMENT_TOKEN_TO_BE_REPLACED