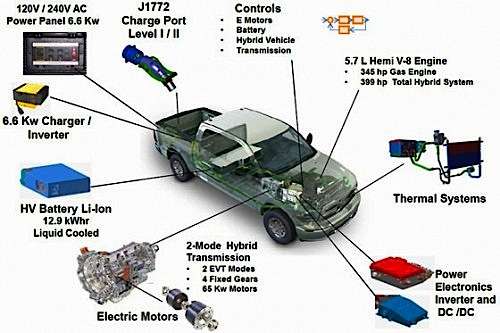 Chrysler has announced it has halted its plug-in hybrid program testing due to overheating battery issues. Despite this, the program will continue.
Advertisement

After a series of issues with overheating batteries for its pickup truck line, Chrysler will focus on different systems to develop a better battery before its next phase of the program. Using a similar idea as explored in the VIA systems with their plug-in hybrids, PHEV called eREVs, this pilot program was to test the capacity of pickup trucks to use excess energy and pump it back as electricity into the grid.

The Chrysler PHEV Program. By temporarily stopping the 109 trucks and 23 minivans Chrysler Town & Country it was working on in its plug-in hybrid test fleet, Chrysler wants to resolve the problems it ran into when certain batteries began overheating in some of the pickup trucks. According to the company’s press release, only 3 of the Ram Truck 1500 pickup trucks sustained damage when their prototype lithium-ion batteries overheated. No fires or injuries occurred with the incidents and the trucks were unoccupied.

The Rest Of The Fleet. If only three trucks showed problems, Chrysler spokesman Eric Mayne said the company wouldn’t comment about the future of other trucks used by municipalities and utility companies in 20 states. Unfortunately, the duration of the truck and minivan projects will not be extended beyond 2014 as planned as a result of the suspension.

Chrysler has tried to catch up to the hybrid competition flourishing everywhere with the testing that began late 2011 for its pickup trucks and in April for the minivan. Funded by a joint agreement with the U.S. Department of Energy and Chrysler, the $65.2 million from the automaker and $58 million from the DOE were to enable Chrysler to compete in the hybrid market. Bottom line is the pickup truck project alone should cost $97.4 million while the minivan will run $25.8 million.

At the heat of the debate are the Electrovaya Inc, batteries, a company based in Mississauga, Ontario, Canada. Without blaming the battery maker, Michael Duhaime, Chrysler's global director of electrified powertrain propulsion systems said Chrysler would have its engineers develop a superior battery. The next phase of the program should see a different battery chemistry that will be added to the product and development.

The Chrysler PHEV Program. So far the results have been favorable for a company not known for its fuel efficiency. With 55 mpg on average for the minivans in testing and no less than 37.4 mpg for the Ram 1500 pickups, this is an important aspect the new Chrysler wants to present. But more than plug-in hybrids, these vehicles might be more destined for large companies and utilities since they are designed for what the company calls “reverse flow”, i.e. a form of V2G, vehicle to grid offloading of excess electricity.

While it might not be very clear what Chrysler expects to publicly out of such tests, it does hint at the longer term goal of using its vehicle batteries to power a variety of electrical needs for homes and businesses. This would come in handy, particularly during peak hours when demand on the power grid is at its highest. Chrysler wants to offer its pickup trucks to companies needing to use their capability of transferring power to the grid. In the meantime, we can only commend Chrysler for proceeding with safety until it can offer the more general public a true plug-in hybrid platform.

Aaron Turpen wrote on September 27, 2012 - 12:34pm Permalink
Hybrid pickups are largely a waste of time. The efficiency gains versus the costs and added complexity are not worth the trouble. A good diesel engine will do more to improve MPG than gas-electric hybrids can.
Nicolas Zart wrote on September 27, 2012 - 12:52pm Permalink
At first glance, I agree with you although I don't have numbers to break it all down. I feel Detroit is caught in yet again another self-fulfilling prophecy that people want big SUVs and pickup trucks, the problem in this economy and ever-rising energy price, is how do you make them feasible. Diesel continues to get more expensive although PHEV is nowhere near getting the results it should with the behemoths, Detroit is caught between a rock and a hard place... again.
Aaron Turpen wrote on September 27, 2012 - 12:58pm Permalink
I don't think the rock is as hard as we might think. The new Dodge 1500 gets 32mpg, Ford F150s with EcoBoost get close to that, and GM's latest SUVs with (not underpowered) four cylinders are getting over 30mpg as well. Frankly, I think the only reason they're offering hybrids in trucks (and full-sized SUVs) is because "hybrid" has a PR ring to it and adds to their CAFE bottom line.
Nicolas Zart wrote on September 30, 2012 - 9:36pm Permalink
Ture, any self respecting comnpany (try saying this with a straight face) has to have hybrid somewhere. I think where this is interesting is how Chrysler skips through hybrids and goes straight into V2G. Not a small step by all means.