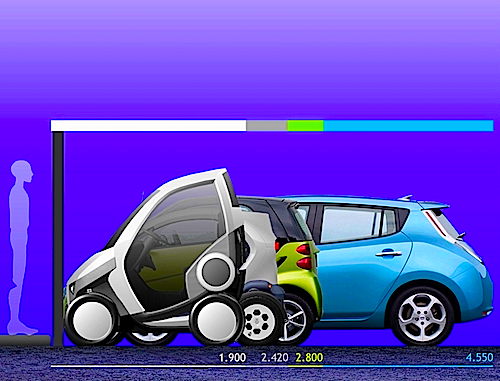 Imagine a car you can fold up, park in any congested city? How about the electric Casple-Podadera that folds up to half a space a conventional electric car?
Advertisement

Not too many understand the true power of an electric car is its city and high-urban use. The more stop and go, idle traffic, congested highways, the higher the range. Cities is where the electric car excels, it’s that simple. Electric cars should never be matched to gasoline car range, which also varies upon use. Instead, we should gauge internal combustion engines (ICE) in city driving against electric cars for a change. But city driving also means lack of space and a premium on parking. So how about a folding EV?

Casple-Podadera The Folding EV. Folding electric cars are nothing new and the Europeans have dabbled with various electric cars by now. What makes the Casple-Podadera so unique is that this two-seater can squeeze into the smallest nook to park, taking the footprint of a motorcycle, at the very least, half a conventional car. You see, it folds. Simple, no? Well, not that fast.

Technically Speaking. With an urban range of about 80 miles, its top speed is 66 mph using 153 Wh/mile. While not a dragster by any means of the imagination, the Casple-Podadera achieves a respectable 11 seconds with a 0 to 62 mph. Weighing in at a svelte 1,590 lbs, you can see how the car can achieve such efficiency. The body panels are made of RTM composite materials to keep the car light, with its underpinning resting on steel and honeycomb panels. This makes the Casple-Podadera sturdy enough to carry occupants safely, via our friends at GizMag. http://www.gizmag.com/casple-podadera-folding-car/26268/?utm_source=Gizmag+Subscribers&utm_campaign=ac0a92dde4-UA-2235360-4&utm_medium=email

Design Wise. It took three years of research and development for renowned Spanish designer Francisco Podadera and Burgos business group Casple to join forces and create this dedicated electric city car. The Casple-Podadera uses current technologies but crams into a 6.2 ft chassis with the wheels in and 7.5 ft with the wheels extended in length. Of course stability and ride comfort increases as the wheels extend. The best part about this electric car is that as soon as you fine a tiny parking spot... it’s yours.

While Europe has higher incentives to use smaller cars, smaller distances to travel and little parking spots makes these “folding” electric cars as intelligent as it gets. It’s to see the Casple-Podadera add another folding electric car on the market.