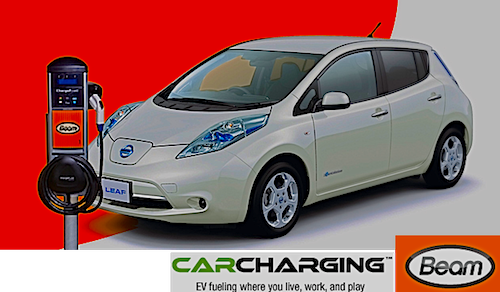 As the electric car industry matures, much is happening behind the scene to make it ready. ChargePoint and DBT are the biggest players and this consolidation in NYC with Beam cements this player in the field.
Advertisement

As the electric car market matures and audience becomes more receptive, a few other battles rush behind the scene to make this electric car dream come true. Besides cleaner, more sustainable energy sources, the race is on for a coherent network of electric car charging stations.

Car Charging Group & Beam Charging. As ChargePoint and DBT continue their juggernaut march into the electric car charging station market, Car Charging Group (http://www.CarCharging.com/) has just announced the closing of its acquisition of Beam Charging.  Founded in 2010 and based in New York City, Beam is the largest EV charging service provider in the New York City metro area. CarCharging is a nationwide provider of convenient electric vehicle (EV) charging services.

With over 400 additional parking garages under contract in New York City, Beam adds to the CarCharging a combined entity that could easily rival the largest electric car charging infrastructure to EV drivers in New York and beyond. While there are overlaps in areas both are now jointly expanding into Philadelphia, Pennsylvania.

According to Michael D. Farkas, CEO of CarCharging: “As New York expands its environmental initiatives and aims to become a national leader in the EV market, as announced by earlier this month, we are proud to continue to serve as the leader in EV charging services. Through the consolidation of CarCharging and Beam’s EV charging network, we will be the dominant player in the New York EV charging market, and we anticipate expanding even further.”

Once again, we are at a time when the electric car industry is maturing, much as the computer industry did two and a half decades ago. This time as consolidation mark the maturity of the budding electric car market, it will be interesting to see where the CarCharging and Beam electric car charging network deal brings to the table.