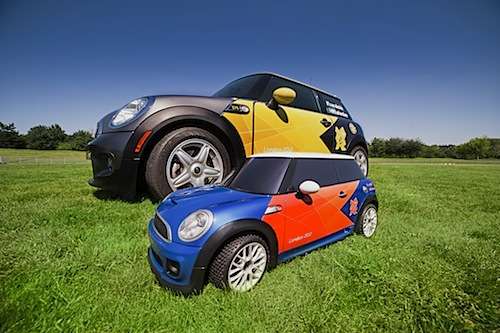 BMW has taken a serious PR and marketing offensive in order to take the electric drive lead and show its German competition it has put money where its mouth is with the Olympic use of its ActiveE, Mini E and future i3 and i8.
Advertisement

BMW Flirts With The Olympics. BMW knows how to work the crowd and its mighty marketing arm spares no energy reminding you it is active on the electric drive front. By being the Official Automotive Partner to the London 2012 Olympic and Paralympic Games, it is shuffling Olympic teams with a range of fully electric vehicles visibly showing the world what it will have to offer.

BMW Electric Skewer. Using 160 of its test-bed BMW 1 Series ActiveE models and 40 of its previous test MINI E’s, those electric cars, EV are used for many Olympic duties. They will also be used to support elements of the Olympic Torch Relay convoy on its journey around the UK, as well as for the Paralympic Torch Relay.

MINI E & MINI Me. By providing 3 electric MINI Es to the Olympic and Paralympic fleet, the specially developed and designed radio controlled electric car will be used on the field to shuttle javelins, discuses, hammers and shots back from the field to the throwing area. The specially made miniature MINIs are roughly a quarter scale of the full-sized version but will carry the athletic equipment situated inside that will be accessible through adapted sunroofs.

Technically Speaking. The electric cars were designed and built according to the LOCOG specification in order to ensure their official use on the field. Each MINI Es will cover on an average 6,000 meters a day, roughly 3.72 miles in four-hour shifts through the nine days of Olympic and Paralympic competition. They were created to handle a up to 8kg of cargo, close 18 lbs, a single hammer, discus or shot or two javelins per contestants. They are to be operated via a simple control system requiring as little technical support as possible.

Their battery pack will be used continuously for 35 minutes with a radio control range of approximately 100 meters, less than 330 ft with a full recharge capacity in 80 minutes.

According to Dr Juergen Hedrich, Managing Director of MINI Plant Oxford: “The MINI team was thrilled to be given this challenge to develop a vehicle with such an important and high profile role during the Olympic and Paralympic Games. I know that everybody was inspired by the challenge and the knowledge that these models will be seen in action by millions of people around the world.”

It’s interesting to note the use of electric cars in the Olympic games as they facilitate transportation of athletes and also help Paralympic Games participants. In many ways, BMW does strike a media coup with its use of MINI E, MINI me and ActiveE for the Olympic transportation of athletes by showing the world how electric cars can be put to good use.