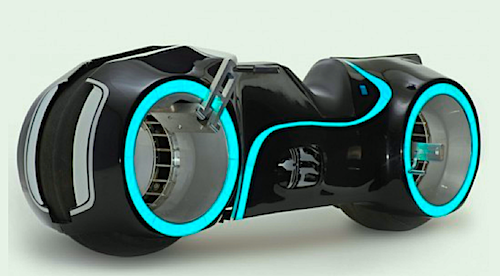 The Xenon Light Motor Bike is going for auction giving you a chance to get your very own personalized one.
Advertisement

Xenon Light Motor Bike caught the eyes and fancy of many with their electric motorcycle and after much debate we know the fate of the prototype. Courtesy of Charitybuzz, it will be auctioned off on its site with a very personalized Lightcycle. There is cool and great, and then there is far out. The Xenon Light Motor Bike Lightcycle is all of the above and more. Sure you could get yourself a Brammo and a Zero Motorcycle, but let’s face, while not too many people know of them, those who do will be able to instantly recognize them. Now a Lightcycle is another story, only Tron movie fans will get close enough to guess its origin.

Is It For Real? The Xenon Light Motor Bike Lightcycle is a real bike and was obviously influence by the movie Tron. It was designed by Parker Brother Choppers and has caught the eyes of the specialized media industry last year, while sparking a flurry of speculation as to whether it was a one off or a preproduction dream from very early adaptors.

Technically Speaking. The bike has an interesting story and had to have a custom lithium ion battery system created to supply the power for its electric motor. It features a stunning handcrafted fiberglass frame sporting no less than 32-inch hub-less wheels striped with OLED light tape around them. The famous and intriguing Swiss car designer dabbled in the 80s with hub-less wheels. The advantages are many but without a full industry research, the technology remains at its infancy. While the bike is no performance beast according to its 100 miles and a top speed of 50 mph in its basic configuration, it is a good platform for intelligent tweaks and upgrades. It originally sported a 96 volt electric motor to give it those performance numbers. The battery pack comes either with a 60ah LiFe PO4 and takes about 4 hours to recharge or for a greater speed of 70 mph, a 120ah LiFe PO4 battery pack.

The tires are custom-shaped to fit onto one of two counter-rotating rims spinning within each other, providing the unique ride and futuristic look of a Tron movie. The rear wheel is chain-driven and uses a rigid rear suspension. Things are different in the front with a spring-loaded front fork. Originally sold via Hammacher Schlemmer, the bikes were to be order built based on the standard platform of 8 1/2' in length by 23 1/4" width and 28 1/2" for the height. The original bike weighed 474 lbs, but that was with a gas engine and gas tank. We can expect the electric version to be slightly heavier.

The Auction. By now you are probably wondering what the auction means and what is going on. Well, the winning bidder will be able to not only choose the bike's battery pack but also which type of motor will be fitted. What this means is the performance could be tweaked to more miles or simply more horsepower. The personalization goes a little further with the option to change the bike's light tape color. I think green or teal would look even more radical.

The Price. Also by now your other question is how much? While the Xenon Light Motor Bike Lightcycle was to be sold for $55,000, the current bidding started at an appealing $23,000 and was up to 24,000. You could be the lucky one to get a very unique electric motorcycle at a very special price bargain that no one has on your block, or city for that matter of fact. The proceeds of the auction will benefit Global Green USA. So hurry up, it closes on March 14, 2012.

My first reaction was to think the riding position would be too uncomfortable to drive for a long time but on second look, it seems more ergonomic than at first sight. Indeed, if most of the weight isn’t on your stomach and evenly spread on your thighs, with little on the wrists , it could be more comfortable then imagined. Of course, to make it truly comfortable, you would need to sink in the seat even lower easing the strain on the arms and eventually stomach. This would also lower the center of gravity and make it a seriously handling bike. Nonetheless, it’s a chopper and choppers are not made for comfort. You could be the lucky one to bid on a personalized unique, one off Tron-type electric Lightcycle from Xenon Light Motor Bike.

Toyota's First EV Will Have a Name of BZ: Toyota BZ
First Videos From Inside The Boring Company's Las Vegas Loop
END_OF_DOCUMENT_TOKEN_TO_BE_REPLACED