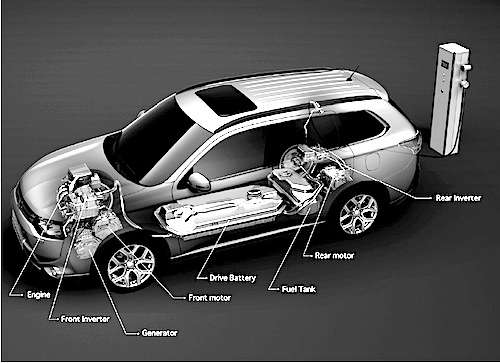 The Mondial de l’Automobile, the Paris Auto Show is giving us the Japanese answer to the German’s plug-in hybrid onslaught. Here’s what you will, and won’t see on our roads soon.
Advertisement

Infiniti Emerg-E. Sadly enough there won’t be an Emerg-E, but its innovative platform should find its way into other cars. Infiniti’s new CEO Johan de Nysschen fresh out of Audi doesn’t believe Nissan is yet the luxury brand it wants to be and that it should take another 15 years.

Toyota iQ EV. Sending yet another message to the crowd, Toyota is showing its electric iQ even though it has revealed it had no intentions on building pure electric cars at the moment. It’s too bad, the electric iQ is a great city electric car with iQ with its 47 kW, 64 HP and its 120 ft lbs of torque, this little electric vehicle, EV can sprint the 0 to 60 in 14 seconds with a top speed of 75 MPH, enough for little highway jumps. All of this gives you about 53 miles of range, which Toyota feels you can achieve in a 3 hour charge on a simple 220V plug. Best yet, it can give you an 80 % charge in 15mn with a fast charging station.

Lexus LF-CC. The Mystery Car this year was none other than the Lexus LF-CC, of which little is known. The company says it sports a brand new direct-injected 2.5L, 4-cylinder gasoline engine coupled to an electric motor with a generator that recharges the battery pack. Interestingly enough, Lexus also talked about a power splitter that combines and reallocates power from the engine, electric motor and generator according to operational requirements. Can we deduce it is a smart plug-in hybrid, PHEV that can be driven in pure electric, gasoline and hybrid modes?

Nissan Terra FCV. Even though the undisputed electric vehicle King Nissan holds the Lion’s share when it comes to EV, it doesn’t stop the company to show a hydrogen fuel cell concept with Terra prototype. While only a prototype, the the company shows it is ready to mass-produce it.

Honda CR-Z. Without much fanfare, Honda is still tweaking the only hybrid with a stick shift we know of with the 2013 CR-Z. You will get 135 HP with a 0 to 60 MPH in 9 seconds. The 2013 version gets a new S+ boost mode, which gives you ten seconds of extra power a la Formula One when your adrenaline levels a little low.

2013 Mitsubishi Outlander Plug-in Hybrid. We could not leave you without the other star of the Mondial, the 2013 Mitsubishi Outlander Plug-in Hybrid, PHEV. This smart PHEV packs a 12 kWh battery pack that can give you 20 miles when fully charged. A 2L, 4-cylinder engine kicks in to extend your range and powers a 70 kW electric motor. You can also choose to drive it in gasoline, hybrid or electric only.

While the Japanese alternative energy car scene might not be as performance bent as the German industry, it does offer a more affordable technology with some clever and well-conceived plug-in hybrids at the Paris Auto Show.