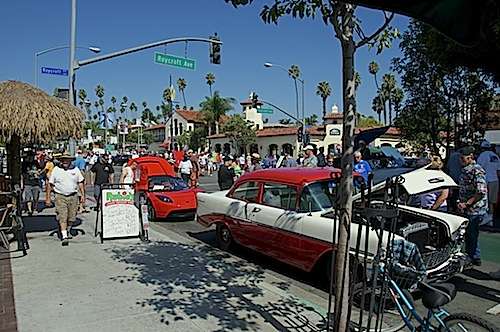 The Long Beach, CA Belmont Shore Car Show is always a fun event where you can witness the amount of time some spend on hot rodding their rides. This year’s was no exception.
Advertisement

The Long Beach Belmont Shore Car Show in California always happens on a hot September day and never fails to attract is fair share of hot rodders. But the show always brings in a few oddities you might otherwise only have seen in magazines. Such was the case of a unique Turner car left in its original condition, a stunning looking De Tomaso Mangusta and even a Ferrari 512 Testarossa for sale by owner.

Turner Sports Cars Ltd. The Turner Sports Cars Ltd. saga is yet another witness to Great Britain’s golden automobile era of the 50s when almost anyone could build a car and get it to the market. The fifties defined England as a niche carmakers and the likes of Lotus, amongst others went on to not only redefine the world of racing but successfully become an integrated part of the automobile history.

The Turner cars were produced between 1951 and 1966 by Jack Turner until a heart attack stopped his endeavor and were sold completed or in kits. Unfortunately, its next coupe model was never completed and would have had a rear mounted Hillman Imp engine. This coupe had a few subtle hints of AC’s famed lines which would eventually spawn the famous Cobra roadsters.

A Red Tesla Roadster. The other recurrent oddity in this sea of hot rods was none other than local Randy Jackson and his red Tesla Roadster. Randy is well known locally for his enthusiasm in the electric vehicle, EV field, recharging his red Tesla with his roof mounted solar panels. He also has put down a deposit for the Tesla Model S. It is good to see people talking to Randy about electric cars. The electric poster child never fails to draw interest from unsuspecting car lovers.

Two other cars worth mentioning is local 1970 hillclimb Long Beach resident who built his very own antique hillclimb racer back in the 70s. The red Ford, made of Ford parts is said to have won the famous Signal Hill hillclimbs and is up to its 4th rebuild. Also a spanking, flashy red 512 Testarossa Ferrari was for sale by its owner. As usual, the Ferrari drew a high amount of curious onlookers.

The show is your typical California event. Car culture of the US, the state has an incredible amount of old cars neatly tucked away in hidden away garages here and there. They all come out to brave the sunshine and a sea of aficionado. I even once saw one of my dream car, a road approved Lola T70! The Long Beach Belmont Shore Car Show is always a fun outing.