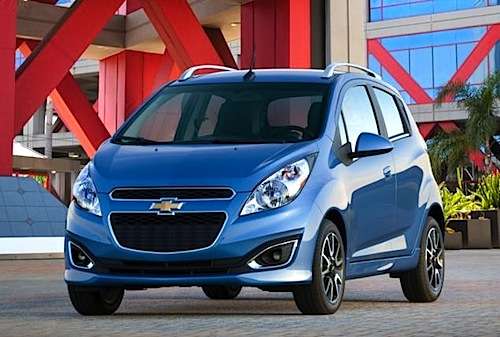 Can GM produce 500,000 electric and plug-in hybrid cars by 2017? The company seems to think it can.
Advertisement

GM announced it is pledging to make 500,000 electric cars, including its plug-in hybrid Volt by 2017. So the question is how? Building 500,000 alternative energy vehicles a year is something only an established mainstream carmaker can do. We wouldn’t expect CODA, Tesla Motors or Fisker Automotive to achieve that, at least until the end of 2020.

Tesla’s Elon Musk chipped in: “The re-election of President Barack Obama will likely mean a continuation of the U.S. government's policy promoting electric and hybrid vehicles.” He backs any efforts to boost federal tax credits for electric cars, ideally to $10,000. One reason why Musk is so optimistic is that Tesla received a $465 million loan from the U.S. Department of Energy in 2010.

GM Promises 500,000 EVs and PHEVs by 2017. GM’s Global Product Development Chief Mary Barra said: "Our plans call for producing up to 500,000 vehicles annually with some form of electrification globally by 2017," Note that it doesn’t mean only straight forward electric cars, EVs or even plug-in hybrids, PHEV but using some sort of electricity in some of its vehicles. This means the company’s eAssist, a system designed to boost fuel efficiency by as much as 25% in some of its gasoline-powered vehicles is included in the strategy. This system has become a central part of GM’s global fuel efficiency and alternative energy vehicle strategy.

To put into perspective, this statement of building 500,000 alternative energy cars by 2017 really only affects 5% of the company’s global sales, which last year accounted for 9 million vehicles. So how on track are they using today’s numbers? So far, in 2012, GM has sold 50,000 alternative energy cars with some form of electrification. That means that in less than five years, it needs to boost those sales by close to 1000%. As far as the eAssist system, that would account for "hundreds of thousands" of vehicles annually by 2017, according to Barra.

GM’s 500,000 Alternative Energy Vehicle Strategy. In order to achieve that, GM is banking heavily on its upcoming all-electric Spark EV, which I’ll write about next week at its unveiling at the Los Angeles Auto Show. The Spark EV is GM’s direct competition to the Nissan's Leaf and Ford’s Focus electric. It will launch first in select markets in the U.S. and South Korea before moving to other countries. GM decided to sell the car instead of limiting its access to lease deals. The reason behind it seems to be the company wants the Spark EV to not be seen is as yet another Californian compliance car but a real one available to all.

GM confirmed the battery pack for the Spark EV is still the A123 Systems Inc, even if the company filed for bankruptcy last month. But if GM is a little late into the pure electric vehicle market game, this push is really to dislodge the green car halo Toyota has enjoyed for almost a decade. Essentially, now we have Ford and GM running after Toyota. Another fact that should help the company reach that high number is GM has finally given Cadillac the go ahead with its take on the Volt, the ELR.

Finally, GM’s number is really a way to match the ever increasing fuel economy standards that will hit all carmakers by 2025. In comparison, Ford has a jump start and is already planning on alternative energy vehicles accounting for 25% of its global offering, with $135 million for its next wave of EVs and doubling its battery testing capabilities by next year. Already its Fusion and C-MAX hybrid deliver 47 mpg across the board, and the plug-in hybrid versions of both cars should further raise fuel economy. One thing is contingent on GM’s future success of building 500,000 alternative energy vehicles by 2017, the cost of battery must come down in order for people to buy electric cars.